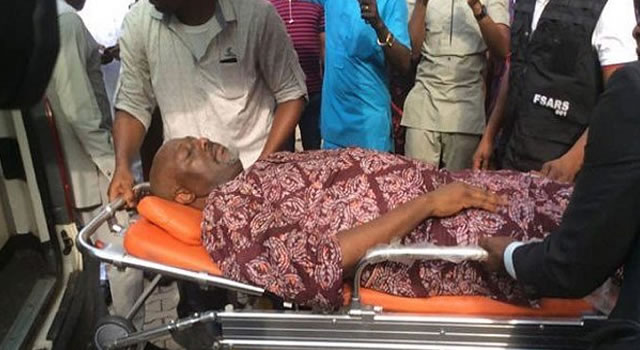 Embattled Senator Dino Melaye appears to have become a merry-go-round tool as the Nigerian Police has been ordered to carry him out of Kogi State, back to the National Hospital, Abuja.

The order to return the senator, who was denied bail in Kogi State on Thursday to Abuja, was given by the state Chief Judge, Justice Nasir Ajanah.

The judge said the senator should be returned to Abuja in the interim, while hearing for his bail conditions will be heard on Monday.

The judge said the decision would enable Melaye have access to medical attention he deserves as the Police Clinic in Lokoja where he is being detained does not have facilities for such medical attention.

He further explained that the interim order became the best option as the prosecution could not provide a federal prison that has the required health facilities to take care of Melaye’s health condition.

Earlier, counsel to Senator Melaye, Mike Ozekhome (SAN), had filed processes for motion seeking the bail of the the Kogi West senator.

Melaye is standing trial for conspiracy and gun running among other charges brought against him.

Ozekhome had prayed the court for a speedy trial of the matter in his submission for bail, explaining to the Chief Judge that his client’s health was critical, hence the need for him to be transferred to the National Hospital Abuja for proper medical care, before the next adjoined date.

In granting the prayer, the Chief Judge ordered the commissioner of police to be served through his counsel in court, while the Senator be taken to the National Hospital, Abuja, still under the custody of the Police.

The matter was subsequently adjourned till Monday, May 7, for parties to argue for the bail condition of Melaye.