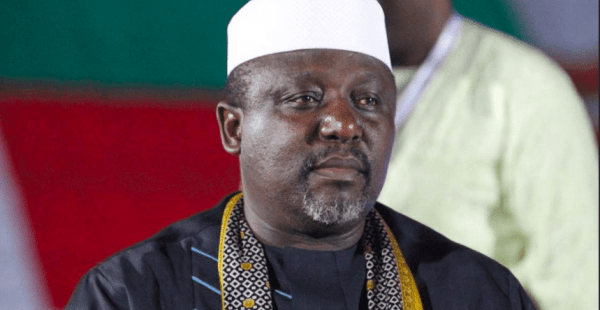 Imo State Governor Rochas Okorocha has been ordered not to begin any developmental work on Ekeukwu Owerri Market.

The order was handed to him on Wednesday by the State High Court presided over by Justice Kemakolam A. Ojiako.

The judge said that he gave the restraining order having read through the Motion on Notice for interlocutory injunction dated and filed February 7, 2018, the 31-paragraph affidavit deposed by the plaintiffs/applicants, the counter affidavit filed February 23, 2018, as well as the adoption of arguments by counsel on both sides.

He said, “The defendants by themselves, their servants, agents, officers and/or hirelings, are restrained from, in whatsoever manner, entering into, building, developing, constructing or carrying out any developmental activity or works, on the subject matter of this suit, that is, Ekeukwu Owerri Market, situate in Owerri, pending the hearing and determination of this suit.”

Earlier, counsel to the plaintiffs, Prince Ken C. O. Njemanze, SAN, had argued that on September 9, 2016, that an interim order was issued by “this honourable court, restraining the defendants from demolishing, destroying, removing and interfering with the subject matter of this suit”.

But he said that on August 26, 2017, that Imo State government under Okorocha “in brazen disobedience of the said order, the defendants with their servants, officers, agents, soldiers, policemen and armed militia and thugs entered and destroyed Ekeukwu Owerri Market.”

He added, “The defendants, their servants and/or agents, recently started excavating the land in dispute and adjoining land, preparatory to erecting or building structures thereon”.

According to Njemanze, the defendants will alter the character of the land in contention if not restrained by the court.