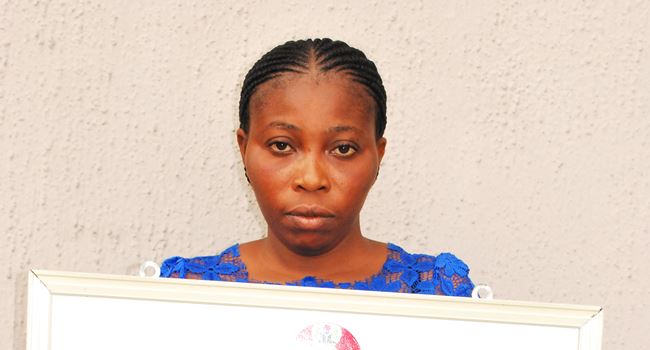 One Gloria Monday has been sent to jail for dealing in petroleum products without a licence.

Justice I.M. Sani of the Federal High Court sitting in Port Harcourt, Rivers State, convicted and sentenced her to prison on Thursday, July 9, 2020.

Monday was arraigned on Thursday by the Port Harcourt Zonal office of the Economic and Financial Crimes Commission (EFCC), and shep pleaded“guilty” to one count charge of dealing in petroleum products

without a licence preferred against her.

The offence is contrary to Section 4(1) of the Petroleum Act CAP P10 of the Revised Edition (Laws of the Federation of Nigeria) 2007 and punishable under Section 4(6) of the same Act.

In view of the plea, prosecution counsel, D.N.Nkwap called a witness to review the facts of the case before the court.

The witness, Kayode Adesanoye, an operative with the EFCC, told the court that the defendant and a vehicle (loaded with 200 litres of petroleum product stored in polythene bags) was handed over to the commission on January 31, 2020 by 6 Division Nigerian Army, Port Harcourt.

Adesanoye said sample of the product was taken to Department of Petroleum Resources (DPR) for analysis and the result indicated adulterated Automotive Gas Oil (AGO).

He further disclosed that the defendant in her statement said that she bought the product from Ogu Market in River State and was arrested along Port Harcourt-Eket way.

Prosecution counsel tendered some documents which were admitted in evidence as Exhibit a,b,c,d,e,f,g (1) (2) by the court and prayed that the court convict the defendant.

Justice Sani found the defendant guilty, convicted and sentenced her to six months imprisonment with an option of fine and ordered that the product be forfeited to the Federal Government.