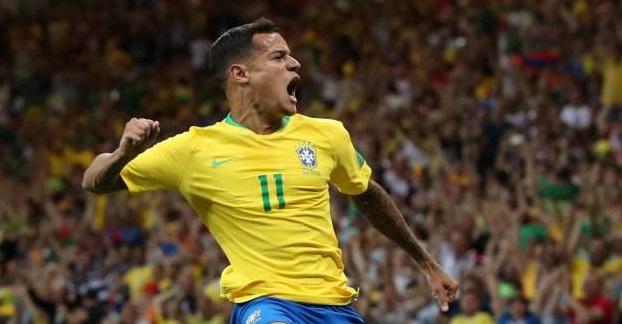 Barcelona star Philippe Coutinho scored from a stunning strike for Brazil in their opening game of the 2018 FIFA World Cup against Switzerland, but the Canarinha were held to a 1-1 draw.

After 20 minutes of sweet contest from both teams, Coutinho sparked up the stadium with a superbly curled opener to put Brazil ahead unto half time.

But the South Americans were stunned as Steven Zuber headed in from a corner early in the second half to drive the Swiss back into the game.

There were several efforts onward by Neymar and the rest of the front three – Gabriel Jesus and Willian – but Switzerland held on till the end to earn the deserved point.

Read Also: ​​’I missed five penalties in a row’ – Maradona stands with Messi

Five-time champions Brazil, represented by a squad of all-round world class players, have been named in many quarters as favourites to win the 2018 World Cup.

But they kicked off by making an unwanted history, as this is the first time since 1978 that they have failed to win their opening game of a World Cup.

The draw brings to an end a run of nine wins in their opening World Cup fixture and they, alongside Switzerland, now trail Serbia, who beat Costa Rica earlier in Group E.

Brazil will face Costa Rica in their next game on Friday while Switzerland will battle Serbia in the quest to advance to the knockout stages.