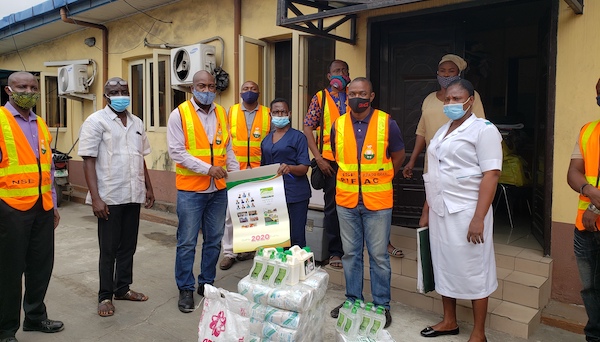 A Lagos State primary healthcare centre in Ijora on Tuesday received palliatives from a group of engineers who made the donation to ease the burden of the COVID-19 pandemic.

The health centre, which takes care of mostly children and nursing mothers, received the palliatives from members of the Apapa branch of the Nigerian Society of Engineers (NSE).

Among items received were hand sanitizers, toilet papers, mopping sticks, as well as other valuables, which were “received with thanks” by the head nurse at the clinic.

The special visit was paid “as part of programmes” lined up to celebrate Engineering Week 2020, with the branch Chairman, Engr. Sunny Ejeje, stating that it was also “a way of giving back to the society”.

He added: “Previously, we have been going to motherless babies’ homes, old people’s homes and even prisons, but because of the COVID-19 pandemic, we decided to visit a health care centre, and give the little we can.”

Also on Tuesday, the group of engineers went on to pay an industrial visit to the construction site of the Marine Beach bridge along Wharf road, Apapa, which is currently undergoing rehabilitation.

Ejeje, who led the team in conversations with the expatriate in charge of the rehabilitation project, said he was satisfied with the progress of the work.

“Usually when people pass by the bridge, they feel nothing is being done. But the bearings, the piers, the columns are the main works which as we can see are being done under the bridge,” he noted.

The Engineering Week is billed to run until Friday, August 28. Other programmes lined up include public lectures, election of new Executive Committee, and the official handover ceremony.