The President of the United States of America, Donald Trump has issued WHO director-general, Tedros Gebreyesus 30 days to make ‘substantive improvements’ or US will stop funding the world body and walk away.

Trump who had earlier derided WHO as a “puppet of China” gave the ultimatum in a letter to the agency’s director-general which he shared on Twitter on Monday threatening to permanently halt US funding to WHO.

This came after President of China, Xi Jinping said Beijing has always been transparent about the outbreak of COVID-19 and will support a probe led by the World Health Organisation (WHO) once the pandemic is under control.

President Xi made the comments in a video message to a virtual meeting of the WHO’s decision-making body, the World Health Assembly on Monday, where he also pledged $2 billion over two years to help with the global COVID-19 response.

In the video speech to the WHO, Xi said China has been open and transparent about the COVID-19 outbreak that first emerged in the country in late 2019 and will support an investigation conducted in an objective and impartial manner. 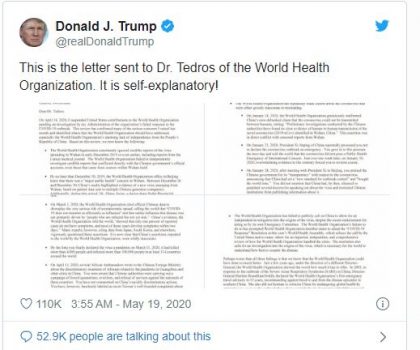