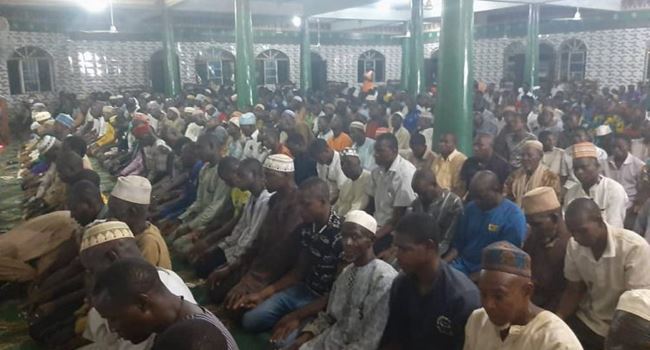 Pandemonium struck at the Agege Central Mosque when Officials of the Lagos State Environmental Protection Agency, LASEPA were allegedly attacked by angry worshipers for disrupting their evening prayers.

Trouble started when the Muslims faithful who were observing their prayer (Solatul ishal) on Wednesday evening in a large congregation, sighted the LASEPA officials who were coming to enforce the total lockdown order issued by President Muhammad Buhari aimed at curtailing the spread of COVID 19.

Reports say the worshipers numbering up to 300 on sighting the LASEPA officials, hurled stones at their vehicles to scare them away as all efforts to talk to the imam, reportedly failed after several attempts.

The situation was however brought under control by the police escort, attached to the team who were able to calm the atmosphere and ensure safety of the LASEPA team.

General Manager, LASEPA, Dolapo Fasawe, while reacting to the incident described it as “barbaric and uncalled for,” saying; “our people are out to protect the lives of the residents of the state and yet were attacked for doing their jobs.

“The state will not hesitate to sanction violators to serve as a deterrent to others.

“It was obvious the gathering did not comply with the executive order. The mosque was filled to capacity. The essence of social distancing is to curtain the spread of Coronavirus.

“The people are endangering their lives and those of their neighbours. “Government has a duty to protect the lives of the people,” she said.