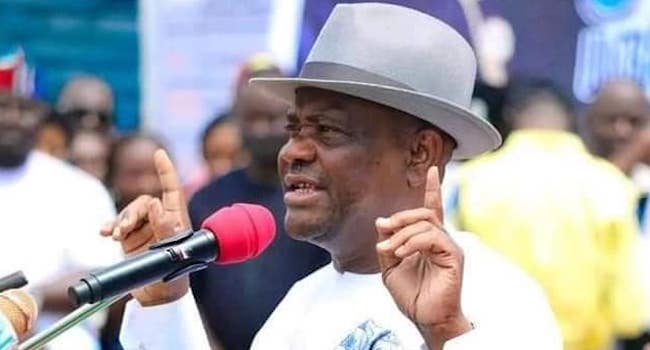 The Cross River State chapter of the All Progressives Congress (APC) has warned the Rivers State governor, Nyesom Wike to stay away from the state.

This is as the National Working Committee (NWC) of the Peoples Democratic Party (PDP) appointed Wike, and his Akwa Ibom State counterpart, Udom Emmanuel, to lead a 22-man campaign council for this weekend’s Ogoja/Yala federal and Akpabuyo state constituencies by-election in that state.

The opposition party made the announcement on Tuesday in a statement signed by its National Publicity Secretary, Hon. Debo Ologunagba, shortly after a meeting of the NWC in Abuja.

The appointment of Wike to lead the PDP campaign team in the state has drawn a lot of condemnation from leaders of the APC in Cros River state who see the Rivers governor as a bad influence following his appearance on Saturday at the campaign rally of the PDP in Calabar.

While addressing the crowd, Wike had accused the APC in the state of playing ‘diabolical politics’ and that he and other PDP leaders would not stand by and watch such impunity.

“Today, I am in Calabar for the inauguration of the Cross River State PDP campaign team for elections into legislative seats in the Akpabuyo State constituency and Ogoja/Yala Federal Constituency of Cross Rivers State.

“It is obvious Nigerians have rejected the APC, not just in Cross Rivers State but across the country. I thank members of the PDP for being resolute and ensuring the rally went ahead.

Meanwhile, the APC Chairman in the state, Barr. Alphonsus Eba, while reacting to the appointment of Wike and Governor Udom Emmanuel to head the PDP campaign council for the election, declared that Wike was not only a “security threat to Cross River State”, but also to the entire South-South region.

Eba, while interacting with journalists at a press conference in Calabar on Tuesday, warned Wike to stay away from the state on or before the election date for his own good.

Eba recalled how Wike had constituted a security threat on Saturday during the flag off of the by-election campaign by the PDP in Calabar, and appealed to the Inspector General of Police to warn the Rivers State Governor from meddling into the affairs of Cross River politics.

“Wike has no business being in Calabar because the by-elections are not in the State capital but Ogoja/Yala and Akpabuyo State Constituencies,” Eba said.

“Nyesom Wike has been a constant meddlesome interloper and today, we want to say that enough is enough. He was here on Saturday to incite violence in Cross River State but it took the maturity of our leader and governor, Professor Ben Ayade, to avert violence.

“What he has set to do overtime is to import the political cannibalism from Rivers State politics into Cross River State. We will no longer continue to allow him to cross the boundary of the line of political decency.

“We do not want any confrontation with any state governor; we are a peace-loving state but that should not be taken for granted.

“I want to say enough is enough. Can you imagine a governor behaving like an emperor even when police advised that the rally be postponed, he went ahead to hold the rally in Calabar the State capital?” Eba queried.