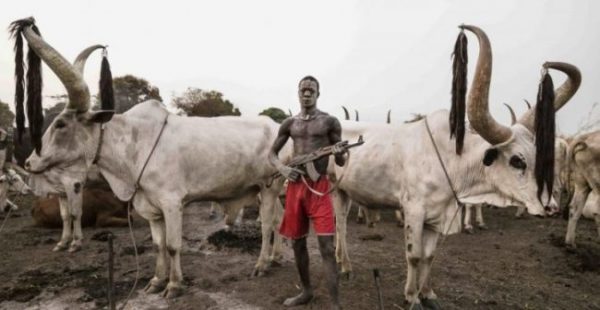 A network of Civil Society Organisations (CSOs) in Abuja, Wednesday, accused serving and retired military officers in cattle business of hiring and arming herders from Mali, Niger and Chad, who cause atrocities in parts of the country.

They also did not exempt ex-personnel of police and other security agencies of complicity, while calling on the Federal Government to convert the Sambisa forest to cattle colonies.

The CSOs also demanded the immediate resignation of Minister of Defence, Brig. Gen. Mansur Ali (Rtd) over his recent claim that the bloody herdsmen attacks in Benue state were caused by the anti-grazing law enacted by the State House of Assembly.

At a joint press conference on the state of insecurity in the nation, on behalf of the International Action Network on Small Arms (IANSA)-Women Network (Nigeria) in collaboration with NINGONET for Humanitarian Development Response Initiative, Tim Aniebonam, expressed fear of threat to food security by the spate of conflicts caused by insurgency in the northeast and herders-farmers’ clashes in different parts of the country.

As a way of checking herdsmen’s menace, the group asked that every Nigerian involved in cattle business should be registered including the security personnel, pointing out that at the moment, there was no national revenue generated from cattle rearing.

“The involvement of serving and retired military, police and security officers in the cattle business is also believed to have contributed greatly to violence.

“Sources observed that these security officers were in the habit of hiring Malians, Nigeriens and Chadians as herders. These foreign herders, not accustomed to the culture of Nigerian herders, are hostile to communities and because many of them are dislodged fighters in their respective countries, are prone to bearing arms.

“The violent foreign herders have also been fingered as teaching Nigerian herdsmen to carry arms. These arms are reported to have been supplied by the employers of the herdsmen,” he stated.

Responding to a question, IANSA Coordinator, Ms Mimidoo Achakpa said if actually what was attributed to the Minister of Defence was not a mistake; he should either apologise to Nigerians or resign.

“We have attacks in states in the northwest; northeast, southwest, southeast and recently there was herdsmen attack in Edo state. I also heard that the farm of former Secretary to the Government of the Federation, Chief Olu Falae was completely burnt down; however, no life was lost. Then we ask, do they have the same anti-grazing law in those states.

“Based on the foregoing, …if I were the President, I will ask the Minister of Defence to quit his job because he is not competent enough to be Defence Minister; for him to have made such pronouncement,” she stated.

The group urged the security agencies to tackle the challenge posed by porous border as a way of checking proliferation of small arms and light weapons in the country.

They further alleged that there is political dimension to the increasing conflicts in the country.

In her contribution, National Coordinator, NINGOTET, Ms. Josephine Habba claimed that illegal aliens were flooding the country to register for the Permanent Voters’ Cards ahead of the 2019 general election.

She said: “We’re not against ECOWAS transhuman protocol but our immigration authorities must ensure that anybody coming into the country is registered at the point of entry.”