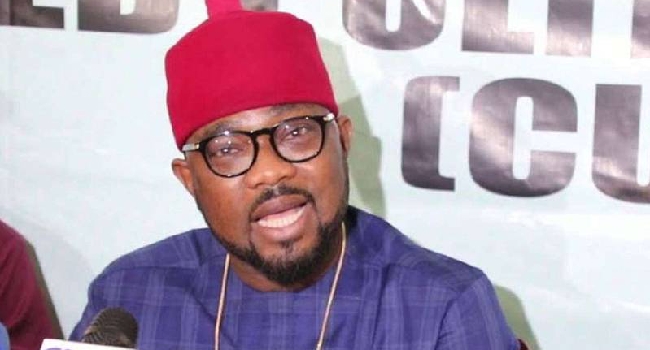 The Coalition of United Political Parties (CUPP) on Wednesday condemned the continued detention of the leader of the proscribed secessionist group, Indigenous People of Biafra (IPOB), Nnamdi Kanu, by President Muhammadu Buhari-led administration.

This was as the spokesman for the coalition, Ikenga Imo Ugochinyere, at a press conference in Imo State, said Kanu’s unlawful detention might portend grace consequences for the country.

Speaking on Wednesday, Ugochinyere urged Buhari to release the IPOB leader to prevent him from dying out of deteriorating health.

He charged the President to obey the court which had discharged him of terrorism charges.

Ugochinyere lamented the refusal of the Nigerian government to negotiate with IPOB like it did with Niger Delta militants.

“I got off the phone from the lawyer to Mazi Nnamdi Kanu, where his deteriorating health condition was brought to my notice. I want to urge Mr President in the interest of peace, interest of national unity, equity and justice and security, to order the release of Mazi Nnamdi Kanu,” Imo said.

“There are several court judgements which have declared his continuous detention illegal. Mr President has the constitutional power through the Attorney-General to order for the discontinuance of the matter.

“Kanu should be released, then we come to the negotiation table and address those issues that led to the agitation.

“If Kanu dies in detention, I foresee a crisis erupting in the country,” the CUPP spokesperson said.

A Court of Appeal in Abuja had in October later acquitted and discharged the IPOB leader from terrorism charges and asked the Nigerian government to pay him N500 million as compensation.

The Nigerian government, however, appealed the judgement and got approval to stop execution of the High Court judgement freeing him.

Attorney General of the Federation and Minister of Justice, Abubakar Malami, said the court rendition could not be used as the only basis to free the IPoB leader of other offences allegedly committed by him against the Federal Government of Nigeria.

Buhari’s ‘best’ not good enough, shows his level of preparedness for office –Kukah