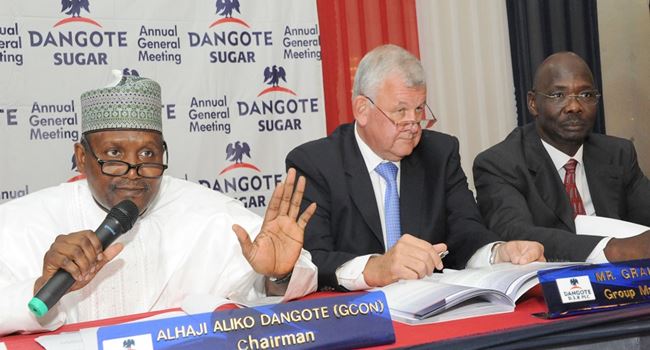 Dangote Sugar Refinery Plc Friday reported it posted a slump in profit in the sum of N631.816 million between January and March this year relative to the corresponding period of last year.

The consolidated and separate financial statements of the world’s second biggest standalone sugar refinery for the first quarter of 2020, posted on the website of the Nigerian Stock Exchange (NSE), revealed that Revenue grew by nearly one quarter or 24.9% from N38.146 billion to N47.643 billion.

A steep rise in Cost of Sales by as much as 36.6% from N38.146 billion to N47.643 billion accounted for why the significant improvement in gross earnings did not trickle down to profit.

Its EPS is currently N1.69 while its Price to Earnings ratio is 7.04. Dangote Sugar’s outstanding shares number 12 billion units.

Dangote Sugar opened trade on the floor of the NSE today at N14 per share.