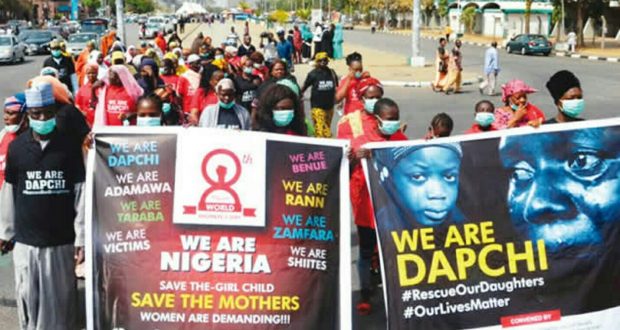 Dissatisfied with government’s handling of the issue, some parents of schoolgirls abducted from Dapchi, Yobe State, on Thursday besieged the premises of the National Assembly complex in Abuja.

They were protesting and demanding that the Federal Government rescue their daughters.

The girls, 110 of them were kidnapped from their school, Government Girls Science and Technology College, Dapchi, Yobe State on February 19 and have remained in the captivity of the Boko Haram terrorist group since then.

Their parents who apparently could no longer bear their frustration, clad in black clothes stormed the premises of the National Assembly, with some of them bemoaning their fate in free flowing tears.

They called on the Federal Government to hasten up and rescue their daughters, before their stories become like that of the Chibok schoolgirls in Borno State, many of whom are yet to be rescued four years after they were also kidnapped by the insurgents.

Although government has rescued some of the Chibok schoolgirls, more than 100 of about 270 of them kidnapped on April 14, 2014 have remained in the captivity of Boko Haram with little or nothing currently being heard about government’s efforts to free them.

Parents of the Dapchi schoolgirls, who were able to reach Abuja through the efforts of Coalition in Defence of Nigerian Democracy and Constitution (CDNDC), supported by Our Mumu DonDo Movement, pleaded with the government to save them from the trauma and distress they have had to face since February 19, when their daughters were abducted.

Many of them who spoke to journalists expressed pathetic tales of what they have been going through and urged every Nigeria to join them in calling on government to quickly rescue their daughters.

They also called on the international community to join forces with the Federal Government to locate and free the schoolgirls.

READ ALSO: DAPCHI: ‘As a mother, I share the sorrow and agony of the parents’- Aisha Buhari

The protesters were received at the National Assembly by Senators Abiodun Olujimi, Joseph Dada and Ali Wakil, who assured them that government was making efforts to free the girls.

The senators also asked them to give government two weeks to bring back their daughters from Boko Haram captivity.

CDNDC convener, Ariyo-Dare Atoye, speaking about the protest said, “After hundreds of Chibok girls were abducted in April 2014, Boko Haram came again for our daughters in Dapchi, Yobe State.

“It is now 17 days since our daughters have been taken away. We do not know how many days they will spend in captivity. We are asking the National Assembly to convene a special stakeholders’ summit to address the plight of women and the girl-child.

“The National Assembly should also investigate the conspiracy behind this abduction and how hundreds of girls were kidnapped in a war zone without them being spotted, or meeting police or military checkpoints.”

DAPCHI: ‘As a mother, I share the sorrow and agony of the parents’- Aisha Buhari