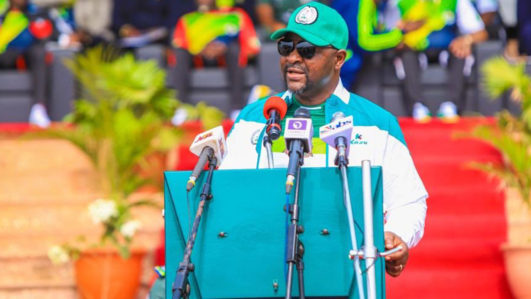 Youth and Sports Development Minister Sunday Dare has expressed his delight over the performances of Nigerian athletes at last week’s Olympic trials.

The Minister was thrilled to bits with the quality of performances at the four-day Athletics Federation of Nigeria (AFN) trials and Invitational Relays, which ended Sunday at the Sports Ground of Yaba College of Technology, Yaba, Lagos.

Dare, who witnessed three of the four days of action, says the quality of the performances has given Nigerians hope of podium appearances in Tokyo at the delayed 2020 Olympic Games which starts on 23 July.

“I am glad that all our athletes heeded the clarion call to take part in this Championship. Your performances are not only impressive, but has set the standard and the tone of what to expect at the Olympics,” said Dare in his address to the athletes at the end of the competition.

“With what we have seen at this trials, we now have a clearer picture and renewed confidence that our athletes will perform well in our areas of core competitive advantage at the Games.

“Blessing Okagbare, Tobi Amusan, Enoch Adegoke, Ese Brume and others’ impressive outings signpost what to expect at the Olympic Games. They cannot afford to let millions of our compatriots who have invested heavily emotionally and financially on them.”

Read Also: Team Nigeria will do better in Tokyo than in previous Olympics —Sports Ministry

Dare also urged the athletes to replicate the performances they put at the Olympic Trials when they get to Tokyo.

”You have the huge responsibility to ensure that we perform well at the Tokyo 2020 Olympics by replicating your impressive performances here in Tokyo.

”As a Government, we have provided all the support and motivation you need for podium success in Tokyo. More than ever, Government ensured that you had a lot of support for a long camping exercise at home and abroad, most of you were adopted through our Adopt an Athlete Initiative by State Governors, Individuals and Corporate bodies.

”These huge investments should not be blown in the winds in Tokyo. Nigerians expect a lot from you, and I believe you will not let us nor yourselves down.

”As we go into the final phase of preparations, I urge you to remain focused, dedicated, disciplined and to shun anything that would attract any form of negativity to our country and for your career,” added Dare.

The duo of Blessing Okagbare and Enoch Adegoke were the standout performers as both set new championship records.

Okagbare, the Nigeria 100/200m record holder scorched to a 10.99 finish in the semifinal to set a new championship record and made historry as the first Nigerian sprinter to run a sub 11 seconds at the Championships.

What could have been a new African record and world’s second fastest time history (10.63 seconds) was halted by an excessive (+2.7mps) wind.

Adegoke on his part became the championship’s second fastest time in history after Deji Aliu (9.98 seconds) with his 10.00 seconds personal best he set to win the blue ribband title.