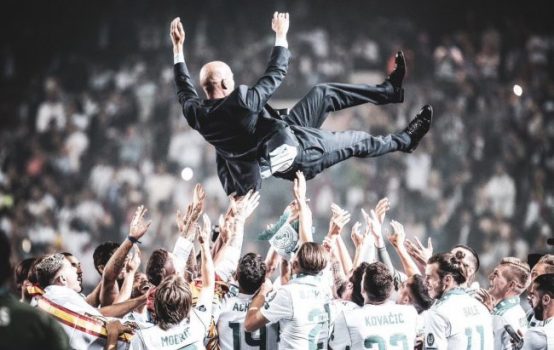 The 45-year-old Frenchman, seated alongside Real president Florentino Perez, told a news conference at the Bernabeu Stadium on Thursday that he had “taken the decision not to continue next year.”

He said: “This is my decision, maybe I am mistaken, but after three years I see this as the moment. If I do not see clearly that we are going to continue winning, a moment comes when you say better to step aside.”

Zidane replaced Rafael Benitez in the role in January 2016, and has led the side to three successive Champions League titles and a La Liga title, winning a total of 10 trophies in 30 months.

“I love this club,” the Frenchman added.

“What I think is that this team needs to continue winning but I think it needs a change, a different voice, another methodology. And that’s why I took this decision.

“It’s a strange moment to do so, I know, but an important one too. I had to do this for everyone.”

Although Zidane had said in February that he would walk away if he felt “there is nothing more to give”, his announcement still came as a shock to fans.

The Spanish giants will now begin a search for their fourth manager in five years, as President Perez noted that “This (Zidane’s announcement) was a totally unexpected decision. Zidane informed me of his choice yesterday.”