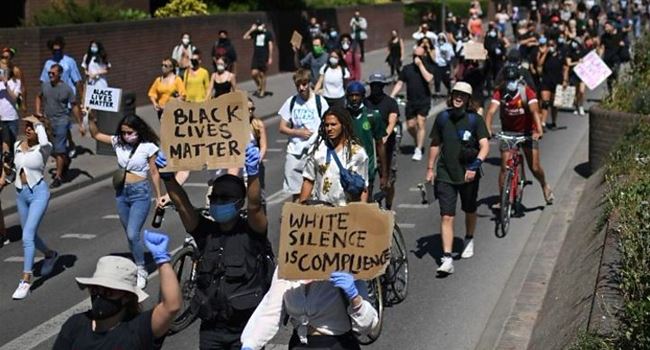 The pressing problem most African families are dealing with at home and abroad is how to ameliorate the hidden and open attacks against them by constituted authorities. Families are pondering and mulling on how to de-escalate the confrontations and keep young Africans safe from deadly assaults.

While Natural Disaster has taken the disproportional death toll on the elders, Africans and minorities; man inhumanity to man has also converged and affected Africans most, no matter where they are. Some Chinese scapegoated and projected blame on African students for Covid-19 that originated in Wuhan. We also witnessed a string of Police ritual massacres in the United States: a lady sleeping at home while Black to George Floyd like Eric Garner snuffed out of breath and life for the world to see.

De-escalation tactics start from within by showing the qualities of cultured people demanding respect. You get what you negotiate, not what you deserve. Look, everyone acts in his best interest and power is not given up out of the goodness of their hearts but when it becomes too risky and expensive to keep. This was how old system of slavery was abolished. So watch out, it is a continuous struggle. Do not be fooled by the replacement of slavery with cheap disposable labor.

What brings all these victimization of Africans home to the Continent is the inability of individual African countries to influence or weld power affirmatively as many other countries would. It is very difficult for Motherland to watch her own African children being sacrificed at the altar of racist ideology, political expediency and promotion or glorification of ranks in open or secret societies because embedded perpetrators happen to be members of constituted authorities.

Those uninformed Africans who think they are supporting conservative or liberal ideology are used as body bags to avoid responsibilities for their actions. This is not new. African chiefs sold their own people as slaves abroad in exchange for mirrors. The slave owners or Massa selected House Africans to supervise their fellow slaves and recently, Arab slave owners appointed other Africans crossing the Desert to whip desperadoes fleeing from African countries into submission and slave camps, used for repulsive acts including body parts removal.

Even Extremist parties have fronted recent African immigrants. So it is not surprising that those self-styled conservatives or liberals are covering the back of their users. As most Africans empathize with their brothers and sisters in Diaspora, or regret the sins of their ancestors for selling them out, we have some within us that are proud conservatives, supporting oppressors that want their “good old days” back.

Let us be clear, these traitors have never seen anything good about themselves or their Continent and would sell their Countries for imported glittering plastics, used discarded goods and environmental garbage. Fake leaders claim to be partners of foreign investors or businessmen opening Free Trade zones and gulping our Foreign Reserves for money laundering abroad. While it is true that some of these African Parasites are created out of greed and self-hate, we have ethnic animosity involved. By the time some swear to spare a snake and kill a fellow citizen or kill your own brothers and sisters as Kaferi or Unbelievers, you realize African mentality has gone insane.

Our suffering abroad and lack of respect for our individual citizens at home is so intertwined, we can not expect others to respect us when we sell one another cheap at home out of spite. Let us face it, lives are cheap in Africa if we are willing to risk it all in the hands of foreigners than stand our ground at home to fight our oppressors.

There is no doubt that there are opportunists who leave their homes where they are too depraved to sow good deeds but go out for soft landing to reap the hard work and magnanimous acts and accommodation of others. The projections of their laziness on victims of host countries are obvious.They will never be respected. Only scornfully treated accordingly as cheap disposable labors.

Since African slaves and their descendants were told how lucky they were to be brought abroad in chains rather than remained in the dark Continent among savages. Fast forward to 2020, some Africans claim they live in the zoo and gleefully echo the “shithole countries” of others. How can you be respected anywhere when you sell yourselves cheap and handed them the excuse to dictate your political economy at home?

Discussions with our children are difficult if History of African Suffrage at home and abroad are not taught in schools to avoid the mistakes of the past. The pride of being an African is being chipped away without many in the new generation realizing it. It might be subtle as skin bleaching or hairstyle but the history of the damage must be seen in an old study of little black children’s preference of white dolls to black dolls. 60 years after Independence, most African countries have not found their bearings, not because they cannot but they choose not to, foolishly building castles in the air far away in foreign countries Covid-19 banned them from visiting.

How many countries in other continents pander, invite, welcome and incentivize themselves as “bushmeat” for economic gain? We can no longer threaten our own very existence with so much hate, Afrophobia, self-destruction and expect others to respect us or our younger generation to succeed. Apart from the psychological bearing on self-esteem, the socio-economic devastation is so conspicuous, other continents smell a wounded Continent as prey and go for a kill.

Only those that are either ill-informed or naive would think they are better off than other Africans. This stigma must be broken and must be corrected right now! We must start immediate remedial actions, instead of future rosy projections. A day wasted are lives lost and opportunities missed. It is about time our leaders were challenged to stop seeking salvation from abroad or Heaven when God only helps those who help themselves.

De-escalation starts from within our Home.

Related Topics:AfricansCOVID-19violenceviolence against Africans
Up Next

The positive side of COVID-19