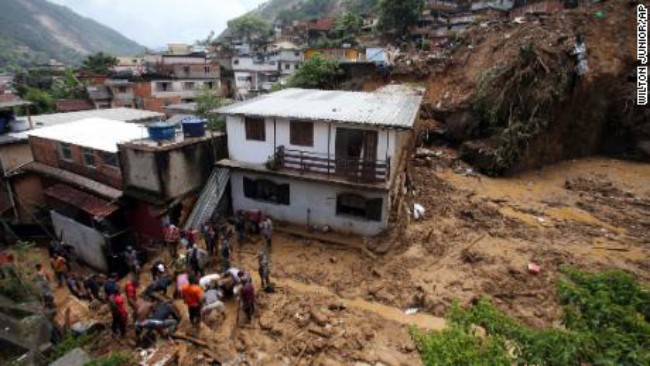 The death toll from a devastating landslide triggered by torrential downpours in the Brazilian mountain city of Petropolis near Rio de Janeiro, which began on Tuesday, has risen to more than 100, as many are still missing, local officials said on Thursday.

The heavy flooding also washed out streets, swept away cars and buried homes, the officials added.

According to the Civil Defense of Rio which has been heavily involved with rescue operations, the heavy rainfall on Tuesday afternoon alone was more than the historical average for the whole of February.

“Floodwaters raced through hillside neighborhoods, leaving a trail of destruction in their wake. So far, 269 landslides had been recorded since Tuesday,” it said.

The Brazilian National Civil Defense said it had saved 24 people, but that more than 439 people had lost their homes and rescue efforts were ongoing as its official had been wading through mud, scanning the wreckage for survivors.

“The work continues and we will do the possible and the impossible to save lives,” Rio de Janeiro state governor, Claudio Castro, said in a post on Twitter on Thursday

Afghan boy dies after being trapped for three days inside well

13 guests die after falling into well during Indian wedding ceremony