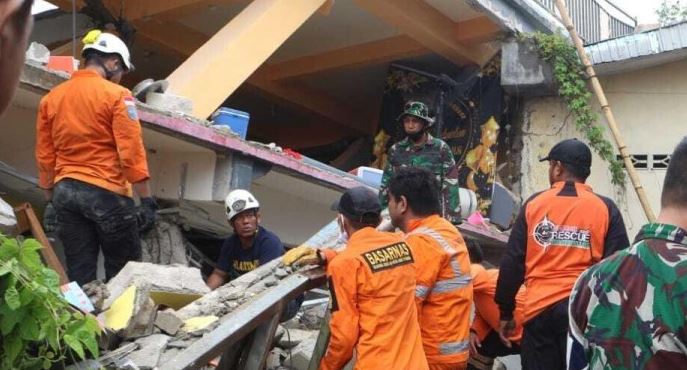 The death toll arising from the 6.2 magnitude earthquake which rocked Indonesia’s Sulawesi Island, trapping dozens and injuring over 600 people in the process has risen from 34 to 42.

This was contained in a statement issued on Saturday by Indonesia’s disaster mitigation agency which revealed that rescue workers are still searching for people trapped under the rubble.

The statement further added that dozens of bodies have been hauled from beneath crumpled buildings in Mamuju, a city of about 110,000, while others were killed south of the area after the quake struck.

“The latest data we have is 45” dead, said Arianto from the rescue agency in Mamuju, who like many Indonesians goes by one name.

Reports say more than a dozen patients and staff are trapped beneath the rubble of a hospital that was flattened by the quake with at least 15,000 people displaced following the incident.

“The hospital is flattened – it collapsed,” said Arianto from the rescue agency in Mamuju city, who goes by one name.

“There are patients and hospital employees trapped under the rubble and we’re now trying to reach them,” he said without giving a specific figure.

Related Topics:6.2 magnitude earthquakeearthquakeEarthquake in Indonesia
Up Next