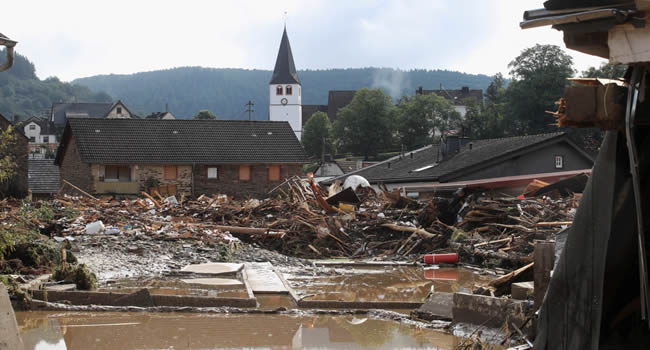 The number of people, who have died in the devastating flooding in western Germany continues to rise.

This is as the death toll reaching more than 130 after police announced 90 fatalities in the Ahrweiler district on Saturday, according to reports by DW.

Saturday’s figure brings the total number of deaths in Germany’s western regions to 133, with 43 confirmed in North Rhine Westphalia late on Friday.

Rescue work continued across Europe where more than 150 people have died in the flooding after heavy rainfall hit parts of Germany, Belgium, France, Switzerland, Luxembourg, and the Netherlands.

In Germany, the Police said on Saturday they feared more deaths would be confirmed in the Ahrweiler district, the focus of the crisis in the western state of Rhineland-Palatinate.

The Police there said they had received reports of 618 people injured.

In the Ahr valley area, where bridges are damaged and roads blocked, the Police asked the public to avoid the area where possible to keep routes clear for rescue vehicles.

Many are still missing more than two days after massive flooding hit the region and search and rescue efforts are ongoing.

Over 19,000 emergency forces are working in rescue operations in the state of North-Rhine Westphalia, according to the regional government.

Some 700 residents of Ophoven were evacuated from their homes on Friday evening after a dam broke in the Heinsberg district in the western state.

The situation remained tense early on Saturday morning, according to a statement issued by the town that is close to the Dutch border.

It was unclear how much damage had been caused by the dam breaking on the Rur River, which flows from Germany through the Netherlands and Belgium.

Later on Saturday, President Frank-Walter Steinmeier is due to visit North-Rhine Westphalia.

He is expected in the Rhein-Erft district and is then due to join state premier, Armin Laschet, in a visit to Erftstadt, where numerous houses and cars were washed away in recent days.

Related Topics:deathFloodGerman flood
Up Next