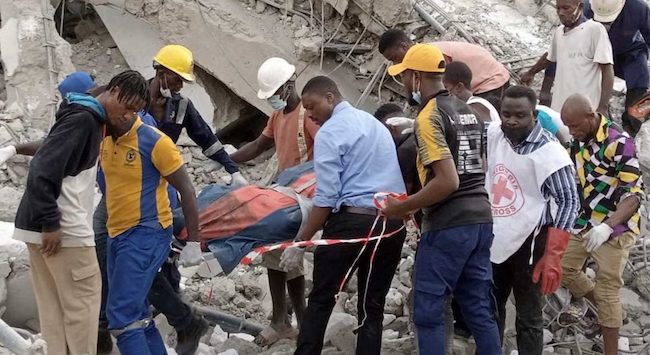 The death toll from the collapsed 21-storey building on Gerrard road in Ikoyi, Lagos has risen to 36.

This was confirmed on Thursday morning by the National Emergency Management Agency (NEMA).

Speaking with journalists, Acting Coordinator of the Lagos Territorial Office, NEMA, Mr Ibrahim Farinloye, said, “So far, 36 people – 33 males and three female — have been confirmed dead, while there were nine survivors.”

Meanwhile, the survivors from the rescue operation include one female and eight males.

The operation to rescue those trapped in the rubble of the 21-storey building which collapsed on Monday afternoon is still ongoing.

Families and friends of people trapped in the rubble have kept vigil at the scene, clinging onto hope and seeking answers, three days after the disaster.

The Governor of Lagos State, Babajide Sanwo-Olu put the death toll at 21 when he visited the scene on Wednesday afternoon.

Although the cause of the collapse is yet to be unravelled, the governor said there were obvious violations and “mistakes from all angles” in the tragedy.

He has set up a panel of inquiry into the incident and promised that those found culpable after the investigations by the panel, will be punished.

University of Ibadan bars graduands without first-class from convocation hall