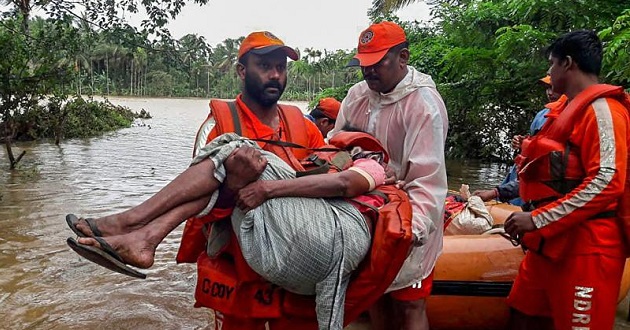 The death toll arising from monsoon floods and landslides which hit the southern state of Kerala in India has risen from 37 to 67, rescue officials say.

In what has turned out to be Kerala’s worst monsoon in almost a century, authorities have placed local agencies on the highest alert level.

Reports say More than 50,000 have sought shelter in relief camps.

“Twenty five deaths were confirmed earlier in the evening. The situation is bad in many parts of the state and the number [of deaths] will likely increase,” said a senior official from the Kerala State Disaster Management Authority.

The monsoon floods caused by torrential rainfall ravaged farmlands and forced thousands to be evacuated with more than half of Kerala’s 14 districts put on high alert since Saturday.

According to Kerala State Disaster Management Authority’s (KSDMA) control room in the state capital, crops on 1,031 hectares (2547.66 acres) have been damaged from the flooding.