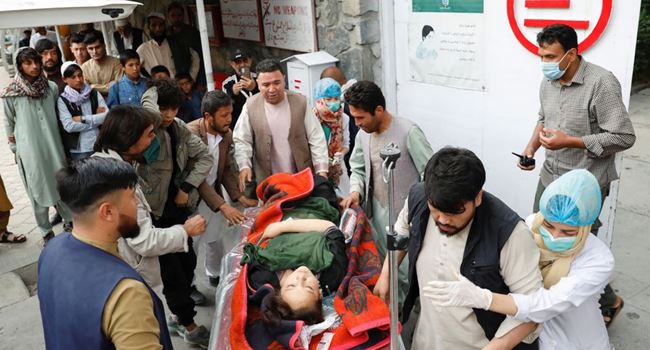 The death toll in a bomb attack targeting schoolgirls in Kabul on Saturday has risen to 85 from the initial 50, as at Monday, according to Danish Hedayat, head of media for the second vice president of Afghanistan.

Hedayat added that another 147 wounded people were wounded in the attack in the Dasht-e-Barchi neighborhood, when a car bomb was detonated in front of the Sayed Al-Shuhada school, and two more bombs exploded when students rushed out in panic.

The area is home to a large community of Shiites from the Hazara ethnic minority, which has been targeted in the past by Islamic State, a Sunni militant group.

Afghan President Ashraf Ghani had blamed Taliban insurgents for the attack but a spokesman for the group denied involvement and condemned any attacks on civilians.

On Sunday, civilians and policemen collected books and school bags strewn across a blood-stained road now busy with shoppers ahead of celebrations for Eid al-Fitr next week while one eyewitness said all but seven or eight of the victims were schoolgirls going home after finishing their studies.

Pope Francis called the attack an “inhuman act” in remarks to pilgrims in St. Peter’s Square in Vatican City on Sunday while the United Nations Secretary-General, Antonio Guterres, also condemned the attack and expressed his deepest sympathies to the victims’ families and to the Afghan government and people.

Security was intensified across Kabul after the attack, but authorities said they would not be able to provide protection to all schools, mosques and other public places.

Conflict is raging in Afghanistan, with security forces in daily combat with the Taliban, who have waged war to overthrow the foreign-backed government since they were ousted from power in Kabul in 2001.

Although the United States did not meet a May 1 withdrawal deadline agreed in talks with the Taliban last year, its military pull-out has begun, with President Joe Biden announcing that all troops will be gone by September 11, but the foreign troop withdrawal has led to a surge in fighting between Afghan security forces and Taliban insurgents.

Critics of the decision say the Islamist militants will make a grab for power and civilians live in fear of being subjected once more to brutal and oppressive Taliban rule.

Chadian Army claims operation against rebels is over