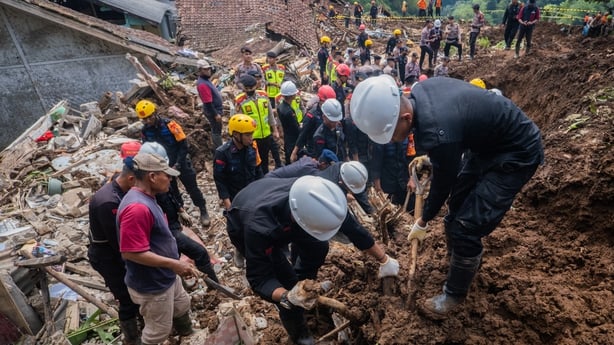 Indonesia’s national disaster mitigation agency on Saturday, revealed that the number of fatalities from an earthquake that hit the major island of Java this week has increased to 310.

The earthquake on Monday caused landslides, toppled buildings, and buried victims beneath piles of dirt.

24 people are still unaccounted for following the earthquake in the West Java town of Cianjur, according to the agency’s chief Suharyanto, who like many Indonesians goes by one name.

A seven-year-old girl who was the focus of a day-long rescue operation has since been discovered dead, according to rescuers.

“The body was immediately handed over to the family,” 28-year-old rescuer Jeksen Kolibu said. “The family… was very sad.”

Dozens of rescuers had spent most of yesterday using digging tools, hammers and their bare hands to clear debris in the delicate mission, which was suspended overnight.

Cika was laid to rest at a nearby cemetery less than an hour after being found.

The focus of the search had been the girl’s grandmother’s house, across the road from the family home, where her mother believed she had been playing when the earthquake struck.

“She was playing outside, I was cooking in the kitchen, suddenly the earthquake happened, so fast, only two seconds, my house collapsed,” her mother Imas Masfahitah, 34, said.

Henri Alfiandi, head of the national search and rescue agency, said: “The problems are the unstable soil, the thickness of the landslide pile aggravated by continuous rain, and the concerns of aftershocks.”

He stated that the emergency phase for the search and rescue mission would run a week until Monday and that officials would determine whether it needed to be prolonged if all the missing persons were still unaccounted for.

According to officials, many of those killed in the earthquake were children, some of whom were in school lessons.

Related Topics:Indonesia earthquake
Up Next