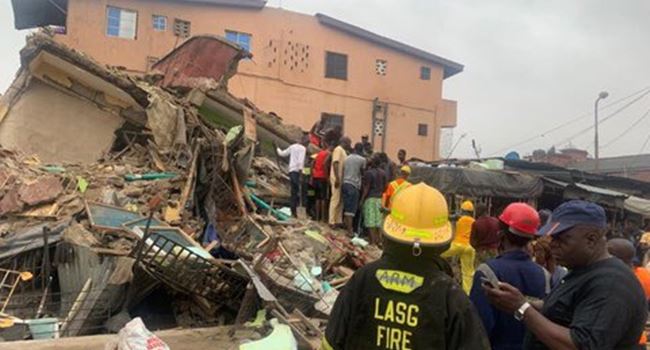 The death toll in Saturday’s building collapse in Lagos Island area of Lagos State has increased to three.

A male child had earlier been recovered dead from the incident.

Two more corpses were recovered at about 12:00 p.m., by emergency responders combing the scene where a three-storey building collapsed at Freeman Street, in Lagos Island.

However, nine persons were rescued alive from the rubble of the collapsed building by operatives of the Lagos Emergency Management Agency (LASEMA) and other agencies involved in the operation.

The Director-General of LASEMA, Dr. Olufemi Oke-Osanyintolu, who confirmed the incident to journalists, said the victims were asleep when the building went down in the early hours of the day.

He said the remains of the three victims had been taken to the mortuary, adding that on-the-spot treatment had been administered to the rescued victims.

Oke-Osanyintolu said: “The agency responded to emergency calls on the collapsed building at Freeman Street, in the Lagos Island area of Lagos State.

“Upon arrival at the incident scene at 4:00 a.m., a three-storey building was discovered to have totally collapsed on people asleep inside.

“Nine victims have been extricated from the rubble alive while three bodies were recovered dead. Their remains were transported to the mortuary by SEHMU while pre-hospital care has been administered to the nine victims by LASEMA and LASAMBUS.