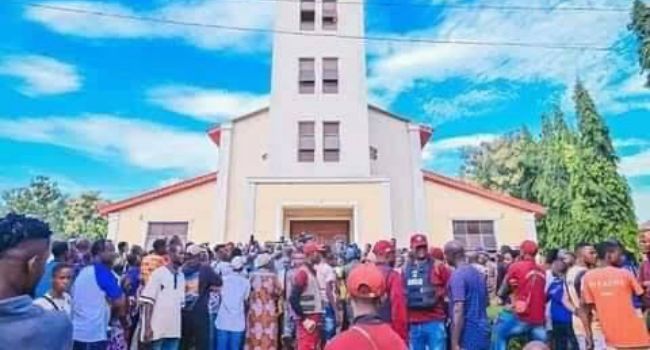 The death toll emanating from the massacre of worshipers at the St. Francis Catholic Church, Owaluwa-Owo, Ondo State, on Sunday, has risen to over 100 as some of the victims who were critically injured reportedly died while receiving treatment in different hospitals.

This was disclosed to Ripples Nigeria on Monday morning by a medical officer at the Federal Medical Centre (FMC), on the condition of anonymity as he does not have the authority to speak to the media.

“I can confirm that so far, the death toll have risen to well over 100. Many of the injured victims died while receiving treatment as we ran out of blood to infuse into them,” he said.

The medical officer added that the FMC and other hospitals were in urgent need of blood donation as the emergency units of the hospitals had run out of blood.

“On Sunday, a total of 35 persons were brought in dead at the Federal Medical Centre and Saint Louis Hospital, while many injured victims were taken to other hospitals in the town and as far as Akure, the state capital.

“Many of the victims died because there was no blood to administer to them,” he added.

Scores of worshippers, including women and children, were mowed down by the gunmen who invaded the church located in the heart of the town and opened fire on them as they were leaving the church at the end of the morning mass.

According to reports, at the end of the shooting which lasted for about 30 minutes, not less than 80 people were killed while an unspecified number were injured, some critically.

Related Topics:blooddeathOWO MASSACRE
Up Next