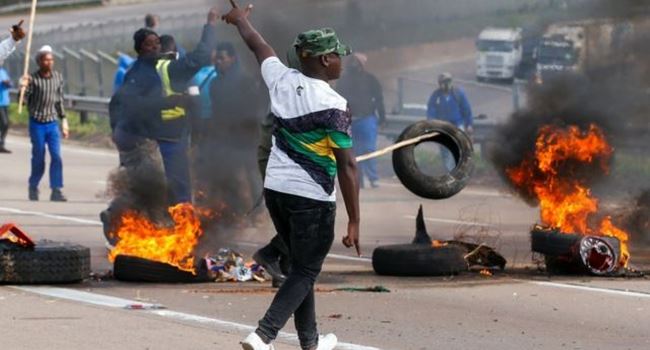 The death toll in riots that have been raging through South Africa following the imprisonment of former President Jacob Zuma, has risen to 75, with 1,270 arrested as violence continues to rage across the country.

Widespread looting of shopping centres as well as burning of shopping malls has continued unabated as the rioting entered its fifth day on Tuesday, while a baby was reportedly thrown from a burning building in Durban after ground-floor shops were looted.

A day earlier, 10 people were killed in a stampede during looting at a shopping centre in Soweto.

The military have been deployed to help overstretched police that had been battling to contain the unrest since it began last Friday.

The South African police said in a statement they had identified 12 people suspected of provoking the riots, and that a total of 1,270 people had been arrested.

Several shopping centres in Soweto – South Africa’s largest township which was once home to Nelson Mandela – have been completely ransacked, with ATMs broken into, restaurants, stores selling alcohol and clothing shops all left in tatters.

Police Minister Bheki Cele has warned that “no amount of unhappiness or personal circumstances from our people gives the right to anyone to loot, vandalise and do as they please and break the law”.

President Cyril Ramaphosa has called it some of the worst violence witnessed in South Africa since the 1990s, before the end of apartheid, with fires started, highways blocked, businesses and warehouses looted in major cities and small towns in KwaZulu-Natal and Gauteng provinces.