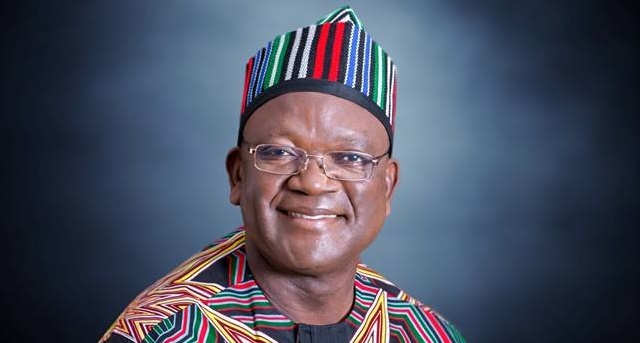 Benue State Governor Samuel Ortom appears to have changed his mind over his decision to dump the ruling All Progressives Congress (APC).

He told newsmen on Thursday at the national secretariat of the party in Abuja after meeting with the party’s leadership led by its national chairman, Adams Oshiomhole, that the party has giving him assurance that nobody can force him out of the party.

However, signals from the state chapter of the party, indicate that Ortom is not held in high esteem by the leadership of the party in that state, a situation that influenced his decision to leave the party.

The party has continued to refer to a former governor and serving senator, George Akume as leader of the party in the state, against the normal practice whereby a governor is the leader of his party at the state level.

Ortom was quoted to have recently said that he had been given red card by APC and that he was now waiting for the party that will approach him so that he can defect.

But after the meeting on Thursday he said, “I was given a red card by a Senator (believed to be George Akume) but the leadership of the party told me that the decision of the party leadership at the national level is superior to any individual and I think that is good enough.

“We have spoken to him, he has spoken to me, stakeholders are going to be spoken to and that is where I belong. We have not concluded the matter, it is an ongoing process because I have always stood for peace and I always want peace to prevail.

“I appreciate the intervention and I hope that we would be able to resolve the matter of differences and this is the funny thing about politics.

“I am here in APC, a member of APC, am still flying the flag of APC and I only said I was given a red card but I have been corrected by the national chairman.”

Oshiomhole, who also spoke to newsmen said, “I have, as the national chairman, assured him that the APC does not have a red card in its cupboard so we cannot give what we do not have and we recognize that in several states, there could be legitimate legal issues, there could be agreements, disagreements, some contestations and these we are familiar with.

“There are evidences of the fact that we are a free democratic party and when leaders have disagreements, our responsibility is to help them to find a common ground and the issues in Benue are not so fundamental that we cannot resolve. We have made it clear that we would resolve them; and Sen. Akume is a very respected leader of the party, a former governor- he will recognize the need for peace and we have what it takes to make peace.

“In Benue, we are going for a win-win solution. Gov. Ortom is not going anywhere; he is a very prominent member of our party. We appreciate his leadership in Benue and we will do everything possible to help those who have issues to have those issues resolved.

Meanwhile, Benue State APC while denying ever giving Ortom any red card contrary to claims by the governor, in the same breath insinuated that the governor had performed below average.

The state APC director of publicity, Mr Peterhot Apeh, who said these in a statement on Thursday in Makurdi said:

“We wish to state categorically that the Benue State chapter of the APC has not at any point given a red card to Gov. Samuel Ortom or any other member of the party.

“Rather, the party at its last state congress in Makurdi endorsed the governor, and leader of the party in the state, Sen. George Akume for another term in office”.

He continued, “In return for the endorsement by the state chapter of the party, we demand from the governor improved welfare for the people of the state,’’ Apeh said.

According to him, these demands have become necessary due to several interventions by the Federal Government in form of bailouts, Paris Club Refunds, budgetary supports.

He said that in spite these and the huge borrowings by Ortom, the state was still clouded with huge salary arrears.

“We demand explanations on the handling of affairs, especially issues bothering on security in the state.

“We are grossly embarrassed that these issues raised with the governor in confidence for the purpose of repositioning governance to improve the lot of Benue people has been juxtaposed and treated unclad without regard to the code of secrecy.’’

According to Apeh, the governor was apparently trying to shy away from accountability and to portray the party in bad light.