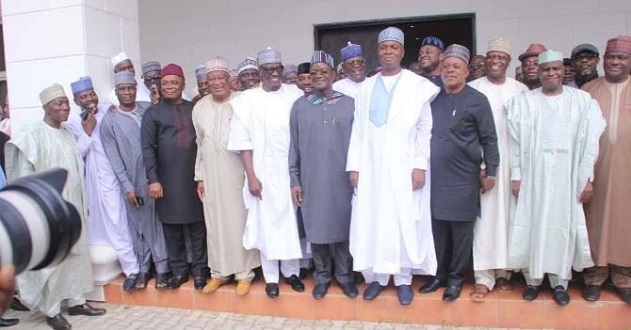 Senate President Bukola Saraki Wednesday led two serving governors of the All Progressives Congress (APC) to a meeting with the National Chairman of the Peoples Democratic Party (PDP), Uche Secondus, and other leaders of the opposition party behind closed doors in Ilorin, Kwara State.

The Punch reported that sources at the meeting said although some of the politicians had joined the eighth fidau prayer for Baraje’s late mother, Aishat, they later converged on Saraki’s house where they were joined by other politicians such as Lamido, Secondus and others who did not attend the fidau.

Read also: We need you in PDP, group begs Lai

Ologbondiyan confirmed the meeting, saying it was a “brotherhood meeting”, adding however that they also discussed political issues.

According to him, they discussed how to move Nigeria forward.

“It was a convergence of notable Nigerians.”

Speculations have been rife that former PDP members in the APC led by Saraki and represented by r-APC may be returning to the PDP soon. Since Governor Ortom’s recent defection announcement, many observers now consider more high-profile defections imminent.

PDP TO BUHARI: Your N242bn funding request a threat to 2019 elections