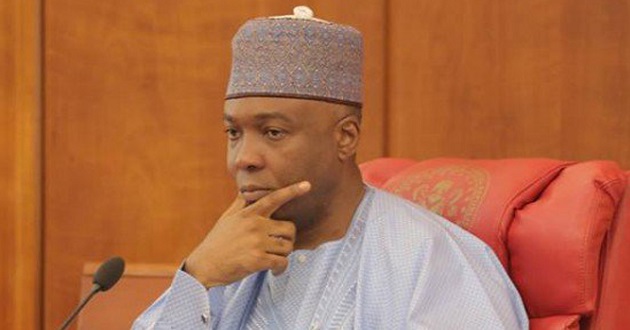 Seems the Senate President Bukola Saraki and his associates are still undecided over their political future, or which political party to berth with.

Saraki is a member of the nPDP now r-APC, and there have been rumors that he would soon decamp to the PDP considering the travails he has passed through in the ruling APC.

There had also been reports that the APC was dangling juicy offers before Saraki and other r-APC members in efforts to keep them from leaving the party ahead of the general elections.

Reacting to the reports however, Saraki in a statement by his Special Adviser on Media and Publicity, Yusuph Olaniyonu, said whatever decision he decides to take would be determined by his supporters and associates.

“As for my political future, we just need to continue to engage with others, listen to advices and exchange ideas because the decision is not that of mine alone. It is for all our supporters and associates to deliberate upon and take a decision based on the overall interest of our people. It is my prayers that Almighty God will guide us right in all our decisions and make a positive turn-around in our country”, he stated.

Saraki noted that the speculations about juicy offers being made to him and his associates as part of the on-going discussions with the Presidency and the APC is untrue.

He said what is at stake is the future of the country and its democracy and that it will be myopic for anybody to be talking about whether certain offers have been made to an individual or if such offers would be accepted or not.

Saraki stated that he saw some reports talking about promise of money or oil block and nomination tickets but added that those viewing the on-going development in that context are simply reducing a major national issue involving many key actors to that of personal benefits and preferences.

“I believe at this point, it is important for me to make some clarifications, end speculations and make my position clear. It is important for Nigerians to know that the discussions that I and many others of like minds are having with the Presidency and the leadership of All Progressives Congress (APC) is not about me and what I want. It involves the future of our country and her democracy. It is about making things better for our people.

“Though there are many speculations being peddled in the media, let it be known these discussions are not about me. Whatever has happened to me in the past has passed. Now that God in his infinite mercy has vindicated me, I have moved on, believing that we have all learnt our lessons.

“As I said in my statement following the Supreme Court Judgement on July 6, I cannot hold any grudge against any individual. I have forgiven all those who played any role in my persecution and likewise, I have asked for forgiveness from all those that I wronged in the past. Our focus should now be about Nigeria. The major issue on the table for discussion is how to strengthen our democracy, rebuild our economy, stop the spate of insecurity, improve the conditions of living of our people and generally chart a course for the development of this great country.

“We will be insulting Nigerians if, as the 2019 elections draw nearer, our deliberations are about personal benefits or how to pay compensation for wrongs done to an individual”.

R-APC to APC: Your begging is coming rather too late, the train has left the station