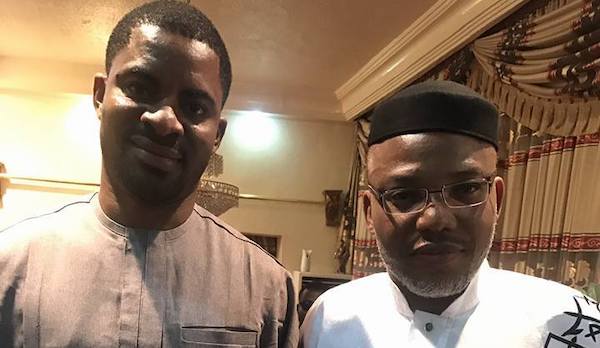 Nnamdi Kanu, Leader of the Indigenous People of Biafra (IPOB), has been branded a coward by Adeyanju Deji.

Deji challenged Kanu to prove he was not a coward by coming back to Nigeria to face President Muhammadu Buhari.

According to him, there was no way the IPOB leader would be serious with the demand for Biafra and at the same time be “running away from ordinary Buhari”.

He wrote: “Some of the miscreants defending coward Nnamdi Kanu makes me laugh. Small intimidation by Buhari, he compromised, collected money and ran away. If he’s man enough, he should come back. I have been arrested 9 times under Buhari; imprisoned thrice but still here.

“You can’t be saying you want Biafra and you are running away from ordinary Buhari, come back. Come back and confront Buhari like many of us are doing here. Abi, you want to achieve Biafra on Facebook? ‪We no be mate.

“Was the military not outside Keffi prison waiting to re-arrest me in December 2018? Why didn’t I run away from Nigeria like a coward? Why didn’t I also compromise & collect dollars?”

Kanu disappeared from Nigeria after soldiers allegedly invaded his father’s home in Umuahia on September 14, 2017.

His whereabouts after the attack became unknown until sometime in 2018 when he reappeared in Israel. He later moved back to England and has remained there till date.

He recently admitted ordering the attack on Senator Ike Ekweremadu, a former deputy senate president, in Germany. He has also ordered his group to attack and “arrest” Buhari in Japan.