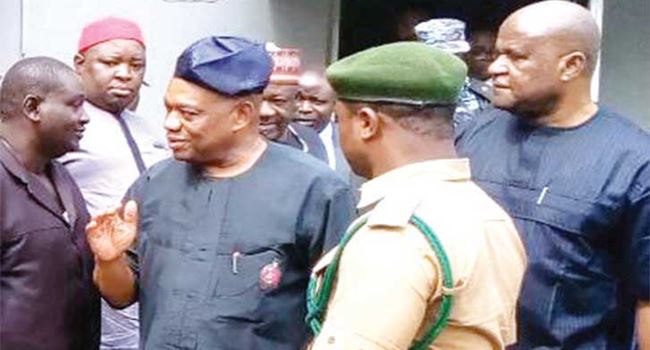 A former governor of Abia State, Orji Kalu, was Thursday sentenced to 12 years imprisonment for fraud and money laundering to the tune of N7.65 billion by the Federal High Court, Lagos.

The Economic and Financial Crimes Commission (EFCC) first arraigned the former governor, one of his former commissioners and a company, Slok Nigeria Limited, on a 34-count charge of fraud and money laundering in 2007.

However, this was amended to 39-count charge when the case resumed a few years later.

The sentences will, however, run concurrently, with the former spending 12 years behind bars, while his “lieutenant” will be there for 10 years.

The court asked the company to wound up and its assets forfeited to the Federal Government.

From the heydays of his ascension to power as Abia State governor in May 1999 to December 5, 2019 when he was convicted for fraud and money laundering, Ripples Nigeria chronicles the highs- and- lows in the political career of “Mazi” ORJI UZOR KALU in this short piece.

2007 – Kalu’s corruption trial began after he was arrested by the EFCC on July 11, 2007, a few months after he left office as Abia State governor. He was later released on bail and accused the Olusegun Obasanjo’s administration of persecuting him during and after his tenure in office, an accusation echoed by the United States ex-Ambassador to Nigeria, John Campbell, in his book, “Nigeria: Dancing on the Brink.”

2010: April 9, Kalu wrote former President Goodluck Jonathan, who was an acting president at the time and begged for the discontinuation of the trial initiated by the EFCC.

2016: In March 18, the Supreme Court quashed Kalu’s bid to stop his fraud trial and ordered him to proceed with the case.

2016: April 7, a Federal High Court, Abuja, fixed May 16 for the re-arraignment of Kalu and Udeogo for alleged diversion of N5.6billion belonging to Abia State.

2016: After a nine-year hiatus, the EFCC on October 31 renewed its prosecution and preferred a 34- count charge against Kalu. But he and his co-defendant, Udeogo, pleaded not guilty to the charges and were granted bail.

2016: The case was transferred to Justice Mohammed Idris in November of that year. Justice Idris eventually delivered the December 5, 2019 ruling that sent the former governor and his co-defendant to 12 years in prison.

2017: September 11, the absence of Justice Idris stalled the trial and a new date of October 3 to 6 was picked for the continuation of hearing into the case.

2018: The EFCC said it would close its case on the matter after calling 16 witnesses. Justice Idris adjourned the case till April 16. The Commission later closed its case against the defendants on May 11 after the conclusion of evidence by a prosecution witness, Chidi Chukwuka, a Deputy Director of the Nigeria Deposit Insurance Corporation (NDIC).

2018: The ex-governor’s counsel, Awa Kalu, on May 28 filed a no-case submission on behalf of his clients and he subsequently adopted this as his written address.

2018: Justice Idris on July 31 dismissed a no-case submission filed by Kalu in his bid to stop the trial. The judge later adjourned the case till September 10 for the defendants to open their defence.

2018: September 28, Justice Idris adjourned sine die (indefinitely) the ex-governor’s trial for corruption. The judge claimed fiat given to him by the President of the Court of Appeal, Justice Zainab Bulkachuwa, to handle the matter elapsed at the end of that month. He was elevated to the Court of Appeal in January and was only handling the case by fiat.

2018: November 12, Justice Idris revoked Kalu’s bail and ordered his arrest for travelling to Germany without the court’s permission. He later adjourned the case till January 23, 2019.

2019: November 28, the judge picked December 2 for judgement on the ex-governor’s corruption trial. He later announced a new date of December 5 for delivering of the verdict on the matter.

2019– December 5, Kalu was convicted and sentenced to 12 years in prison for fraud and money laundering.