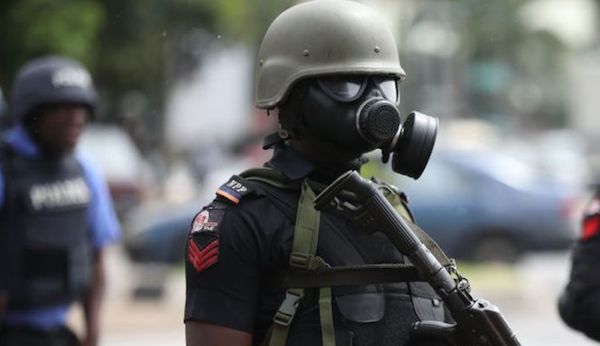 A tragic scene played out in the Ozoro headquarters of Isoko North Local Government Area of Delta State, when youths suspected to be internet fraudsters (Yahoo Boys), Monday, clashed with policemen in the area.

Reports say the youths were protesting alleged brutality and extortion against them by the police in the area when tragedy struck.

A 23-year-old boy identified as Collins, was reportedly struck with a stray bullet, leading to his death.

Trouble started when the protesters took to the streets of the town, displaying placards which bore various inscriptions such as “Police stop extorting money from us”, ” Police leave us alone” among others, as they marched from Owhelogbo junction down to other major streets before terminating at NDC road.

An eyewitness who craved anonymity said the youths “came out this morning to protest against the police continuous harassment of young boys suspected to be internet fraudsters.

“They are complaining about the police searching their phones on the way and asking them to pay some huge amount of money to bail themselves on the spot otherwise they will be taken to the station. Others complained of being invaded in their houses by the police without search warrant.

“The police later mobilized and in the process of trying to dispel the protesters, a gunshot from a stray bullet hit the lad and he died on the spot.”

The State Police Command Public Relations Officer, Onome Onovwakpoyeya who confirmed the incident said that the police was still investigating who shot the bullet that killed the victim.