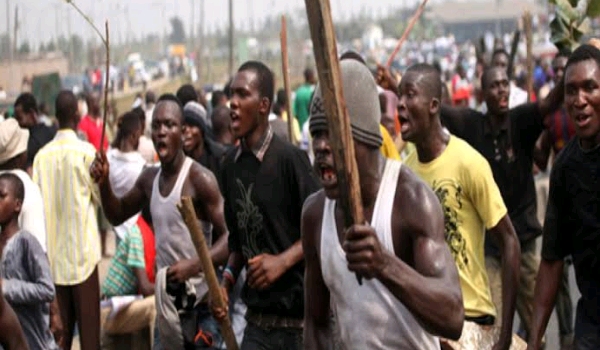 Residents of Ughelli in Delta State on Friday protested the alleged killing of a young man simply identified as Mr. Patrick by operatives of the Special Anti-Robbery Squad (SARS).

The SARS operatives reportedly shot the victim in the leg for refusing them access to his phone on Thursday.

The SARS team were further alleged to have left the victim at the scene with blood gushing out of his wounds.

It was gathered policemen from the Ughelli station later rushed the victim to the Ughelli Central Hospital where he was receiving medical treatment.

A witness reported: “The young man did not do anything. SARS operatives who were patrolling the area on Thursday stopped the victim and demanded that he must open his phone for them but he declined.

Read also: 5 burnt to death, 10 injured as bus tumbles, goes up in flames

“The operatives started beating him until they collected the phone from him, but he refused. He is a very humble boy in the area.

“When the incident was happening it was the women in the area that were bold enough to challenge them. When others were still flogging him, one of the operatives opened fire on his leg. They jumped into the vehicle and left.

“It was other police officers from the Ughelli Police Station that came to rush the man to hospital. He is there at the hospital as we speak.”

It was learnt that the protesters who set fire on tyres on major roads leading to the Ughelli Area Command called for an end to SARS operations, positing that several innocent persons have died from their onslaught.

One of the protesters, who only gave his name as Igho, called on police authorities in the state to ensure that justice was served the victim.

He said: “We no longer move freely because of SARS in Ughelli. Once they see two or three youths walking together, the next thing you will see is SARS operatives searching their phones.

“We cannot continue like this. The police authorities should investigate the incident and stop their men from maltreating people,” he stated.