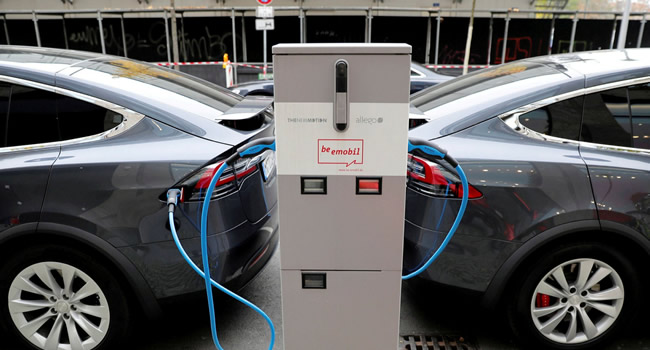 As politicians argue over the 3 or 5 percent community allocation in the Petroleum Industry Bill (PIB) data shows that export markets for Nigeria’s crude oil are buying more electric vehicles and this will wipe out the need for 3.5 million barrels per day by 2030.

The projection is above Nigeria’s current daily production level of 1.344 million barrels as at May, 2021.

This increase according to IEA saw the reduction for consumption of crude oil by 0.5 million barrels per day in 2020.

“Expanding EV stock also enhances energy security by reducing oil use. Globally, the projected EV fleet in 2030 displaces over 2 million barrels per day (mb/d) of diesel and gasoline in the Stated Policies Scenario and about 3.5 mb/d in the Sustainable Development Scenario, up from about 0.5 mb/d in 2020.,” IEA said.

However, China is leading the charge in total electric vehicles on the road with 4.5 million, while Europe recorded the largest annual increase to reach 3.2 million.

In fact, Europe where most of Nigeria’s crude oil sales are from has proposed a draft to accelerate phasing out the use of petrol in vehicles in 14 years time.

The United Kingdom more than doubled registrations to reach 176,000. Electric cars in Norway reached a record high sales share of 75%, up about one-third from 2019.

Sales shares of electric cars exceeded 50% in Iceland, 30% in Sweden and reached 25% in the Netherlands.

In fact according to IEA Faster Adoption and Manufacturing of Electric Vehicles (FAME II) scheme is India’s key national policy relevant for EVs.

Under the programme, the national government recently approved the addition of 5,595 new electric buses in various states.

The report also shows the country allocates $1.4 billion over three years from 2019 for 1.6 million hybrid and electric vehicles.

Also, another $243 million over five years for the advanced chemistry cell battery sector.

Why is the Data important?

Europe and Asia is the biggest export market for Nigeria’s crude oil.

According to the latest export data from the National Bureau of Statistics, in Q1, 2021 these two continents accounted for 90% sales of Nigeria’s crude.

With more shift to cleaner energy, Nigeria’s oil export revenue may be significantly hit in the future years.

Also, Organization of the Petroleum Exporting Countries(OPEC) in a forecast note in 2017 had warned that if electric vehicles make up one-third of the car market by 2040, it could knock out nine million barrels a day of demand, or about 90 percent of Saudi Arabia’s daily output.

Bitcoin transactions by Nigerians increase to $38m despite CBN ban