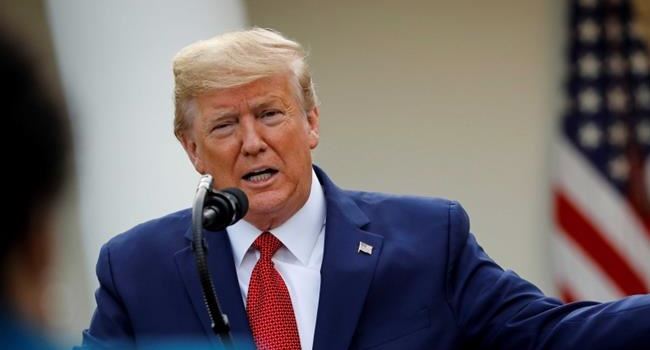 A Democratic congressman, Bennie Thompson, representing Mississippi, has sued former United States President, Donald Trump, for allegedly inciting the January 6 riots at the Capitol Building while Congress sat to ratify the election victory of the then president-elect, Joe Biden.

Thompson, the chairman of the House Homeland Security Committee, who filed the lawsuit on Tuesday, also joined Trump’s personal lawyer, Rudy Giuliani, and groups including the Proud Boys and the Oath Keepers, extremist organizations that had members charged by the Justice Department with taking part in the siege.

The congressman accused Trump in the federal lawsuit of inciting the deadly insurrection at the U.S. Capitol and of conspiring with his lawyer and the extremist groups to try to prevent the Senate from certifying the results of the presidential election he lost to Biden.

The lawsuit is believed to be the first filed by a member of Congress seeking unspecified punitive and compensatory damages.

The suit, filed in federal court in Washington under a Reconstruction-era law known as the Ku Klux Klan Act, comes days after Trump was acquitted in a Senate impeachment trial that centered on allegations that he incited the riot, in which five people died. That acquittal is likely to open the door to fresh legal scrutiny over Trump’s actions before and during the siege.

Even some Republicans who voted to acquit Trump on Saturday acknowledged that the more proper venue to deal with Trump was in the courts, especially now that he has left the White House and lost certain legal protections that shielded him as president.

“The carefully orchestrated series of events that unfolded at the Save America rally and the storming of the Capitol was no accident or coincidence. It was the intended and foreseeable culmination of a carefully coordinated campaign to interfere with the legal process required to confirm the tally of votes cast in the Electoral College,” the suit reads.

“Inciting a riot, or attempting to interfere with the congressional efforts to ratify the results of the election that are commended by the Constitution, could not conceivably be within the scope of ordinary responsibilities of the president,” Joseph Sellers, a Washington lawyer who along with the NAACP filed the lawsuit on Thompson’s behalf, said in an interview.

Though the impeachment case focused squarely on accusations of incitement, the lawsuit more broadly accuses Trump of conspiring to disrupt the constitutional activities of Congress, namely, the certification of election results establishing Biden as the rightful winner, through a month long effort to discredit the outcome and to lean on individual states and his own vice president to overturn the contest.

Related Topics:Donald TrumpIncitementlawsuitunited states
Up Next

Woman shot in the head during Myanmar protest dies