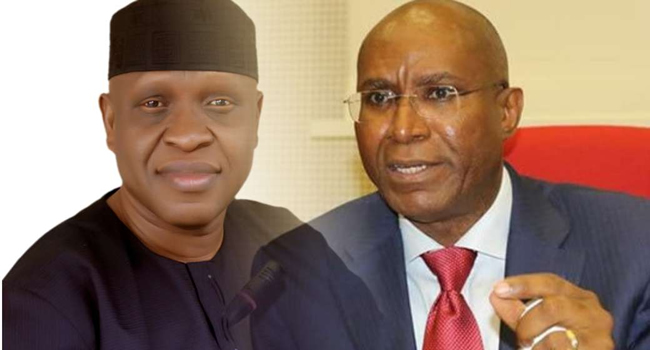 The Deputy President of the Senate, Ovie Omo-Agege, and the Founding Leader of the All Progressives Congress (APC) in Delta State, Olorogun O’tega Emerhor, have set aside their political differences and called for an end to the divisions in the party in the state.

Omo-Agege and Emerhor particularly called on leaders of the party in the state to close rank and work for the unity of the party ahead of the 2023 general election.

Both leaders spoke at Evwreni in Ughelli North Local Government Area at the weekend, when the deputy president of the Senate visited Emerhor at his country-home with other leaders of the party, including Hon. Francis Waive, who represents Ughelli North, Ughelli South and Udu at the House of Representatives.

The deputy president of the Senate said the visit was significant in putting the rivalry among the various camps in the party behind and forging a formidable unity among its members.

He said, “As both of us will say, Delta State is ripe for the taking. We have also said that can only happen if all of us are on the same page. Come to think of it, what are we fighting for? At the end of the day, we are brothers first before we became members of APC. Party will come and go but the Urhobo people will remain Urhobo. Delta State will remain Delta State.

“As from today, we should all know that we are one. The party is not just about Emerhor and me, we still have other leaders. In politics, we drag who gets what, but while doing that, we must do it with civility. We must do it with humanity. We must not play it in a way that it becomes almost impossible to reconcile yourselves at the end of the exercise.”

He commended Emerhor for committing to the peace process in the state, noting that he would work with everyone to ensure that APC wins future elections in the state through unity.

In his remark, Emerhor, who was the 2015 governorship candidate of the party in the state, described the visit by Omo-Agege as historic, saying it was time for leaders and members of the party from across the state to embrace peace and unity in the interest of the party.

He agreed that the main reason why the APC has not been able to take power from the ruling People’s Democratic Party (PDP) in the state, was because of the division among its leaders.

He tasked Omo-Agege to do more by reaching out to other party leaders like Chief Great Ogboru, Festus Keyamo, and others to bring everyone together.