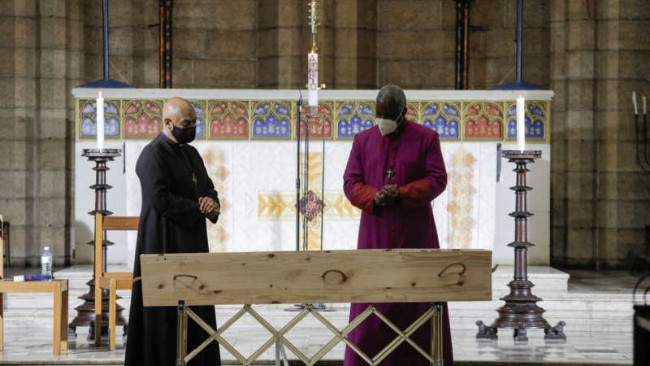 The body of Archbishop Desmond Tutu will lie in state in Cape Town’s St George’s Cathedral for two days from Thursday to allow hundreds of mourners to pay their last respects.

Thabo Makgoba, Tutu’s successor, said a prayer after priests burnt incense over the coffin before it was lifted from the hearse.

Tutu’s widow, Leah walked slowly behind as the coffin entered the cathedral in the city centre.

The anti-apartheid activist died on Sunday aged 90. His official state funeral will be held on New Year’s Day after the lying-in-state period, to allow mourners say their last good-byes.

Hundreds of people have flocked to the cathedral since Sunday -where Tutu served as the Anglican archbishop of Cape Town for a decade until 1996 – to lay flowers and sign a book of condolences.

Tutu’s lying in state had been extended to two days “for fear there might be a stampede,” Reverend Gilmore Fry told AFP outside the church waiting for the body to arrive.

Memorial services were also planned for Tutu in Johannesburg and Pretoria on Thursday.

The Archbishop Tutu IP Trust and the Desmond & Leah Tutu Legacy Foundation in a joint statement said that the funeral will be planned according to Tutu’s wishes.

“He wanted no ostentatiousness or lavish spending. He asked that the coffin be the cheapest available and that a bouquet of carnations from his family be the only flowers in the cathedral,” the two organisations stated.

Tutu had also wanted military rites to be limited. Only the South African flag will be presented to his wife, Leah, with whom he was married in 1955 and had four children.

Tutu’s remains will be privately cremated and his ashes will be interred inside his stonewalled former parish where he preached for many years.

In line with Covid-19 restrictions, only 100 mourners will attend the funeral.

Tutu won the Nobel Peace Prize in 1984 in recognition of his non-violent opposition to white minority rule and subsequently chaired a Truth and Reconciliation Commission to expose racial atrocities.