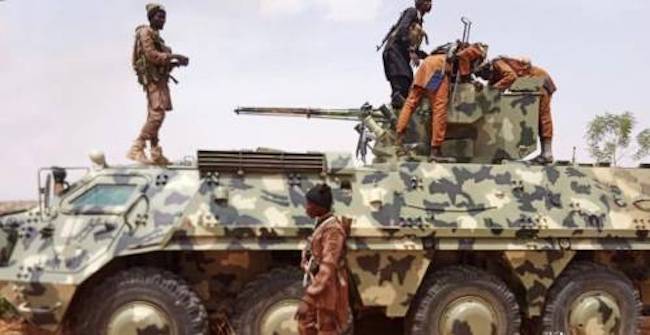 Despite denials from the Nigerian Army that there was no attack on the 156 Battalion located in Mainok, Borno State, the Islamic State West Africa Province (ISWAP), has released photographs of newly acquired armoured tanks and operational vehicles of the Nigerian Army allegedly captured during an attack on Sunday.

An exclusive report by Sahara Reporters on Wednesday, revealed that the ISWAP insurgents which broke away from Boko Haram, displayed different models of armoured tanks and operational vehicles the group had reportedly captured from Nigerian soldiers.

Backing the images with a statement, the extremist group, formerly known as the Jamā’at Ahl as-Sunnah lid-Da’wah wa’l-Jihād, also claimed they killed many soldiers in the attack which lasted for several hours.

The group which struck the battalion with more than 15 gun trucks, said it burnt down the military base and killed several soldiers who could not withstand their fire power and had to run away.

Some of the photographs featured in the report, showed two brand new Isotrex Legion MRAP, a T-55 tank, Ukrainian BTR-4EN, motorcycles and different hilux operational vehicles allegedly captured from the convoy delivering them to the Nigerian Army Base at Mainok.

It was gathered that the soldiers were on patrol to clear some Boko Haram elements in the area following credible intelligence when they were ambushed by the ISWAP group.