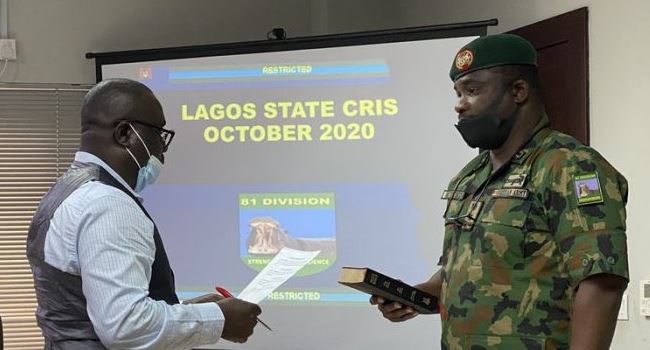 Despite its earlier denials, the Nigerian Army on Saturday admitted that its troops went to Lekki tollgate in Lagos last month with live and blank ammunition.

The Commander of the 81 Division, Military Intelligence Brigade, Victoria Island, Brig.-Gen. Ahmed Taiwo, told the Lagos Judicial Panel of Inquiry that soldiers went to the scene of the #EndSARS protests with live bullets.

The army had denied severally that its troops fired live bullets at the harmless protesters on that fateful night of October 20.

While being cross-examined by the lawyers to #ENDSARS protesters, Mr. Adeyinka Olumide-Fusika (SAN) and Mr. Adeshina Ogunlana, the army commander said there were men and materials from the force at the Lekki tollgate on that day.

Taiwo said: “We had men and materials – vehicles and rifles for shooting. A portion of the force carried live bullets in case they were attacked.

He said the soldiers acted within the Rules of Engagement and exhibited professionalism in their conduct.

“The soldiers will be using both live and blank bullets and in this particular case, we saw that this protest had been infiltrated by hoodlums.

“We had peaceful protesters no doubt, but there were hoodlums who sought to take advantage of the protest,” he added.

The commander, however, insisted that the army was not deployed to the Lekki tollgate, but were on patrol to clear up the Lekki and Eti-Osa corridor.

He added that the troops were attacked by hoodlums around Oriental Hotel while one soldier was wounded.

Taiwo said the soldiers did not engage in any form of dialogue or negotiation with the #EndSARS protesters at the tollgate because they were attacked by hoodlums.

“They were pelted just before Oriental Hotel. Their response was to fire blank ammunition. They (soldiers) were stoned just as they dismounted.

“By the time they fired a few shots in the air, the hoodlums retaliated. Our mission was not to clear the protest, we were just on our way to ensure normalcy on the Eti-Osa corridor.

“One officer was wounded, he was stoned on the lips. If we are attacked with stones, the only option is a gunshot,” he concluded.