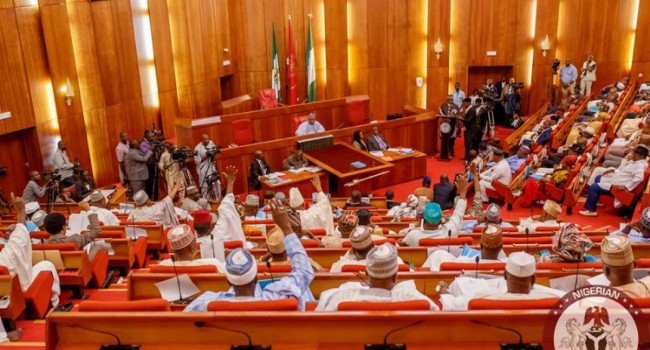 The Senate on Thursday, passed the contentious Electoral Act Amendment Bill amidst a lot of rancour and heated debate, with 52 voting for it while 28 voted against and 28 were absent.

The controversial issues in the legislation which include the transmission of election results electronically and spending limits for candidates of political parties, has been a point of acrimony that has pitched Nigerians against the lawmakers.

The legislation has been seeking to repeal and re-enact the 2010 electoral act, which has been under consideration for years.

During plenary, the Senators spent more than three hours considering over 100 clauses of the bill, with majority of the lawmakers succeeding in empowering the Nigerian Communications Commission (NCC) to determine the feasibility of electronic transmission of electoral results.

During the clause-by-clause consideration of the bill, Seputy Chief Whip, Sabi Abdullahi, proposed that the NCC must “certify that national coverage is adequate and secure, while the National Assembly must give approval before the Independent National Electoral Commission (INEC) can transmit election results electronically.”

But in countering Abdullahi, Albert Bassey, representing Akwa Ibom North-East, kicked against the motion and said the initial proposal made by the committee should be retained.

Quoting section 50 (3), Akpan said the “commission may transmit results of elections by electronic means where and when practicable.”

After Akpan’s submission, the Senate became rowdy, a situation which lasted about 20 minutes and was only settled with the use of a voice voting method, with the Senate eventually retaining Abdullahi’s amendment after a 52-28 vote.

While the ‘Nay’ vote was to empower NCC to determine e-transmission of electoral results, the ‘YES’ was to retain the aforementioned section 50(3) as recommended by the committee, with all Senators on the platform of the ruling All Progressives Congress (APC), voting ‘NO’.

Here is how the Senators voted: