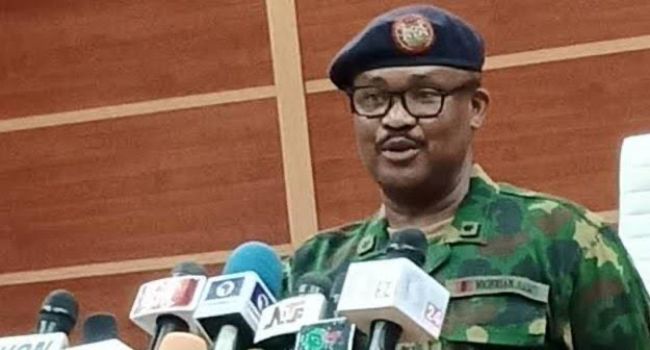 The Nigerian Defence Headquarters (DHQ) said in a report on Thursday that a total of 98 terrorists of the Boko Haram and Islamic State West Africa Province (ISWAP) were eliminated in different sustained operations in the North-East in the last three weeks.

The report which was issued by the Director of Defence Media Operations (DMO), Major General Bernard Onyeuko, during an update on the activities of the Nigerian Armed Forces between April 28 and May 19 in Abuja, said during the same period, 1,627 terrorists voluntarily surrendered to the troops, bringing a total of 53,262 terrorists and their families who have so far surrendered.

Onyeuko also disclosed that 63 civilians who were abducted by terrorists and bandits were rescued while some top insurgent commanders were arrested within the same period under review.

“As at 16 May, 2022, a total of 53,262 have so far surrendered. Also, troops of Operation Hadin Kai, on 13 May, 2022, acting on intelligent report, arrested Mallam Modu Goni, a terrorist and logistics supplier at Bunin Yadi Market.

“Troops, during the ambush at a terrorists’ crossing point at Kaidieri village, killed five terrorists and captured assorted weapons and different calibres of ammunitions.