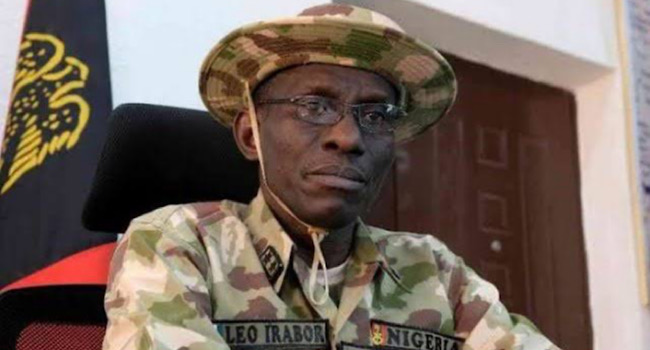 The Chief of Defence Staff, Maj.-Gen. Lucky Irabor, has pledged to ensure that the armed forces of Nigeria upscales its operations to ensure adequate protection of critical national assets across the country.

Irabor made the pledge during a meeting with the Group Managing Director, Nigerian National Petroleum Corporation (NNPC), Mr Mele Kyari, at the Defence Headquarters on Wednesday, February 24.

Ripples Nigeria gathered that the meeting was held to discuss the security challenges being encountered in the execution of the Ajaokuta-Kaduna-Kano Gas pipeline project.

He said that DHQ and NNPC had a long-standing engagement with respect to the protection of critical national infrastructure such as oil and gas assets of the NNPC.

According to him, an opportunity has come for us to advance that relationship such that the losses that we have to bear would be minimised.

“It is my intention to cooperate maximally with you and your team to give the necessary instructions that will enable all officers within the leadership hierarchy of the armed forces to be of help to the NNPC given that our existence economically rests almost solely on the proceeding arising from your operations.

“To that extent, we must do everything possible to support whatever it is that you required,” he said.

Earlier, while congratulating Irabor on his appointment as CDS, Kyari said he had confidence that the coming onboard of Irabor would lead to enhanced protection of the NNPC assets around the country.

He said the meeting was meant to solicit for the support of the armed forces to protect the assets of NNPC across the country.

“We are here to reiterate that we need your help profoundly to protect our national assets that spread across the country and to protect our operational personnel working in all the critical phases that we occupy.

“And lastly, to curtail elements of criminality around our assets that are obviously of great impact to our national well-being.

“We are counting on every support that we can get from you and with the assurances that we are certain that this would work for our country,” he said.

Kyari said that the nation had lost and continued to lose petroleum products and crude oil to theft and other forms of criminality.

He said that the losses had reduced since 2015 due to the collaboration between NNPC and the military, saying that about 200 barrels of crude were still being lost every day,” he said.