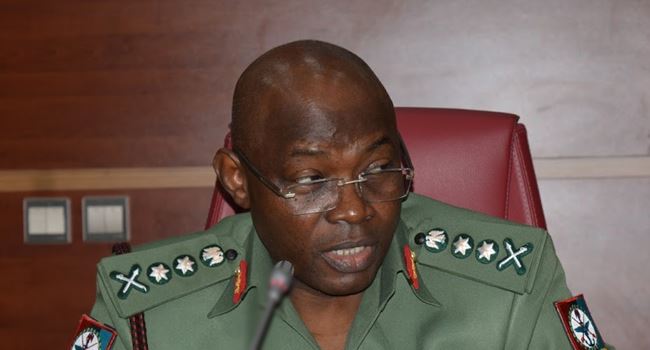 The Defence Headquarters (DHQ) on Wednesday, assured that President Muhammadu Buhari’s safety is guaranteed in Katsina, despite a recent attack in the state that has been claimed by Boko Haram.

The attack happened just hours after Buhari arrived in Katsina to commence what the presidency described as a seven-day private visit to his Daura country home.

Despite the heightened tensions, the DHQ spokesperson, Defence Media Operations, Maj. Gen. John Enenche, during an interview with Arise News on Wednesday, said there are no worries over Buhari’s safety in Daura, adding that the security of the President is not threatened by the activities of bandits in his home state.

He said: “One of the major tasks of the Armed Force of Nigeria is to ensure the protection of government and state actors and in that regard, the Commander-In-Chief is very safe in Katsina and anywhere that he is or will be at all times.”

Enenche assured the public that the military is doing everything within its powers to ensure the safe return of the abducted students.

Reacting to a viral recording released on Tuesday, of the Boko Haram terror group claiming to have abducted the schoolboys in order to discourage people from western education, Eneche said, “On the basis of the characteristics of terrorists all over the world from the time of Al-Qaeda, Taliban, Al-Shabaab, all of them, wherever they will boost their ego or show relevance, that is what they will do.

“What did they even do? Somebody spoke on audio and said, ‘I am Shekau.’ Shekau on a secondary note is a brand. All that needs to be done is somebody using his voice. The total aim of terrorists is to instill fear into people even beyond their scope of influence.

“So, it is easy for the layman to agree that it is them (Boko Haram) because even if it is kidnappers or armed robbers, their aim is to instill fear and kill.”

However, Eneche appealed to parents of the abducted students to “have short patience with the military forces. With what the military is doing, by the grace of Almighty God, very soon, the children will be back,” he said.

Gender based violence starts from the womb –Chimamanda Adichie