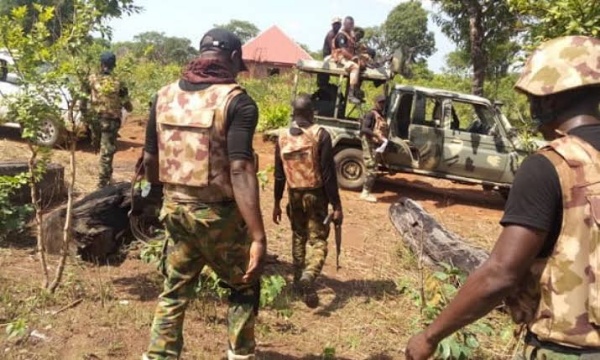 Nigerian troops operating in the theater of war in the North-East, have arrested a suspected foreign logistic supplier and arms dealer to the terrorists, named Mallam Abatcha Bukar, as well as eliminated over 252 terrorists fighters in different air and ground operations in the last one week.

This Defence Headquarters (DHQ) at a press briefing on Thursday in Abuja on the fight against insurgents, said troops of the Operation Hadin Kai of the Nigerian Army rescued three more abducted Chibok girls namely Jinkai Yama, Falmata Lawal and Asabe Ali in the process.

While addressing the conference, the Director, Defence Media Operations, Maj. Gen. Musa Danmadami, said one of the troops’ operations led to the arrest and neutralising of scores of terrorists and other criminal elements in land and air operations in Kaduna, Katsina and Zamfara States.

“In the last two weeks, more than 252 Boko Haram/Islamic States West Africa Province (ISWAP) terrorists have been eliminated by troops of Operation Hadin Kai in the North-east region.

“Success were recorded in a series of land and air interdictions at the fringes of various villages and communities in Borno and Yobe States.

“The troops in one of the operations, neutralised 52 terrorists, arrested 14 others and rescued three of the abducted Chibok girls named Jinkai Yama, Falmata Lawal and Asabe Ali.

“They were rescued at different locations with their children and 19 other abductees.

“Also recovered are one AP mine, 86 rounds of 7.62mm ammunition, one motorcycle, 16 bows and arrows, seven bicycles and 10 mobile phones.

The DHQ spokesman added that the land and air components of the Army had, on September 3, launched an attack on identified terrorist enclaves at Gabchari in Bama Local Government Area of Borno and dealt a deadly blow to the terrorists.

“The air strike resulted in the killing of a large number of the insurgents, while the land component mopped up the fleeing terrorists.

“Over 200 terrorists were neutralised, including five high-profile terrorist commanders. Equally, a total of 556 suspected Boko Haram/ISWAP terrorists and their families, comprised of 115 adult males, 189 females and 252 children, surrendered to troops at different locations.

“All arrested suspects and recovered items have been handed over to the appropriate authority while the surrendered terrorists and their families are being profiled for further action,” he said.