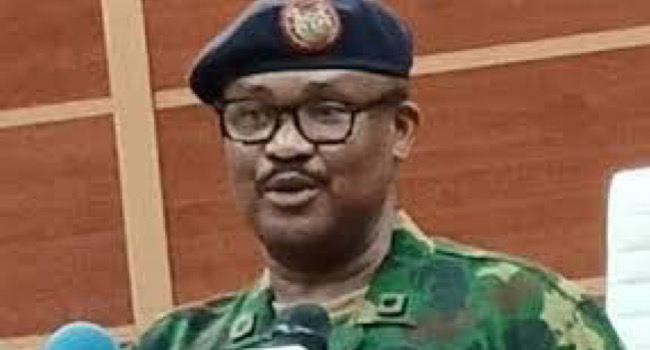 The Nigerian Army has said troops of the 7 Guards Battalion and 167 Special Force Battalion in conjunction with the air component of Operation WHIRL PUNCH, successfully neutralised over 2,016 Boko Haram/ISWAP terrorists between July 14 and July 28, as well as eliminating 30 terrorists who attacked the Presidential Guards Brigade in the Bwari area of the Federal Territory Capital (FCT), Abuja.

Spokesman of the Defence Media Operations, Major General Bernard Onyeuko, who disclosed this while briefing journalists on the activities of the Army in Abuja on Thursday, added that within the same period, hundreds of terrorists and their families surrendered to the military and are being profiled.

“Within the last two weeks in focus, a total of 2,016 suspected Boko Haram Terrorists/Islamic State of West Africa Province terrorists and their families comprising 360 adult males, 580 adult females and 1076 children surrendered to the troops at various locations in the North East theatre of operation.

“Consequently, about 30 terrorists were neutralized and their enclave and hide out destroyed. Ground troops also recovered 6 motorcycles, 2 AK47 rifles, 1 fully loaded LMG magazine, amongst others during mob up.

“The Joint Task Force Operation HADIN KAI in the North East zone between the 17 and 19 July, 2022, responded to the activities of Boko Haram Terrorists/Islamic State of West Africa Province criminals who kidnapped some civilians and rustled some cattle at Balkani village in Jere Local Government Area.

“Troops made contact with the terrorists and rescued the kidnapped civilians and recovered the rustled cattle. Also, at another location troops rescued two civilians that were kidnapped by Boko Haram Terrorists/Islamic State of West Africa Province terrorists at Kayamade village in Kondoga Local Government Area of Borno State.

“All rescued civilians and recovered items were handed over to relevant authority, while surrendered Boko Haram terrorists and their families were profiled and handed over to the appropriate agencies for further action,” he said.