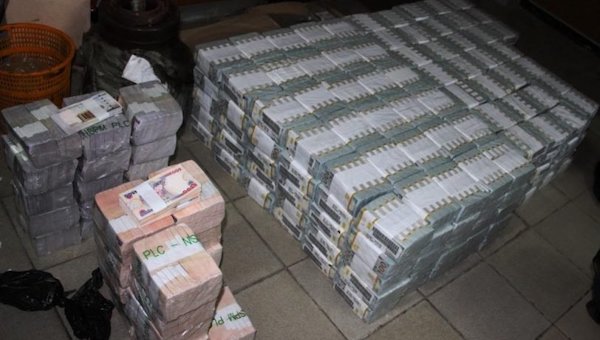 The Economic and Financial Crimes Commission (EFCC) has dispelled rumours claiming that about N900million in its custody turned into paper.

In a series of tweets on Monday, the anti-graft agency said the huge sum of naira notes were subject of prosecution at an Ibadan Federal High Court.

“The attention of the Economic and Financial Crimes Commission, EFCC has been drawn to several online reports alleging that about N900 million (Nine Hundred Million Naira) of mutilated naira notes, being subject of prosecution at the Federal High Court, Ibadan, and kept in several boxes in EFCC’s custody has turned to paper. The report is very mischievous and a gross misrepresentation of facts of the matter,” it said.

The commission stated that the case was reported by the CBN in 2015 and the parties involved were in court.

In the course of investigations, EFCC operatives visited the CBN office in Ibadan to inspect the said boxes and discovered that the monies had been tampered with.

According to the commission, the discovery had prompted the EFCC’s involvement in the case, resulting in interrogation of suspects and subsequent prosecution.

“At no point were the boxes of the mutilated naira notes taken to the office of the EFCC.

Counts one and two of the charge against the suspects reads:

“That you Patience Okoro Eye; Afolabi Olufemi Johnson; Ilori Adekunle Sunday; Kolawole Babalola, Olaniran Muniru Adeola and Fatai Adedokun Yusuf on or about 5th August, 2014 in Ibadan within the jurisdiction of this Honourable Court, have by virtue of abuse of your office, being employees of Central Bank of Nigeria, contributed to the economic adversity of the Federal Republic of Nigeria when you destroyed a box marked “…

“Counted Audited Dirty” filled with Newspapers in place of a box containing N10,000,000 (Ten Million Naira) of N1,000 denomination and which activity led to the increase of money in circulation which the briquetting exercise of Central Bank of Nigeria was intended to control and you thereby committed an offence punishable under Section 1(2) (b) and Section 10 (1) of the Recovery of Public Property (Special Provision) Act, Cap. R4, Laws of the Federation Nigeria, 2014″.

“At the last hearing, the Court mandated the EFCC to present them (the boxes) at the next hearing as evidence.

“This is a clear departure from the mischievous accounts of naysayers who erroneously misinterpreted the position of the court to claim that the boxes were tampered with by the EFCC.”