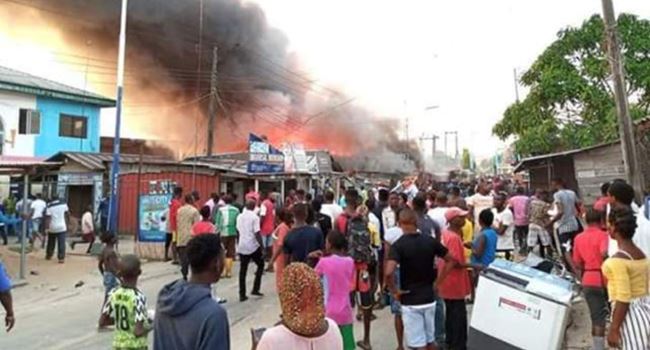 The streets of Bayelsa State have been taken over by demonstrators rallying against the Supreme Court’s judgement that stopped the inauguration of Chief David Lyon as the governor of the state.

Reports say scores of women took to the streets on Friday morning blocking major roads to protest the judgement insisting that no handover of power would be conducted in the state without Lyon.

Further reports revealed that many of the protesters who spontaneously joined the rally chanting “No Lyon, No Governor” in Bayelsa State baring placards later besieged the Government House in Yenagoa to press their demands.

Many were also spotted displaying the flags in solidarity with the All Progressives Congress (APC), with a host of them refusing to vacate the roads leaving motorists and commuters stranded.

A commuter who spoke on the condition of anonymity said that she ran into the obstacle created by the rioters describing her experience as terrible.

Also, a detachment of police men were also sighted at the secretariat of the All Progressive Congress (APC) ostensibly to prevent any damage to the property.