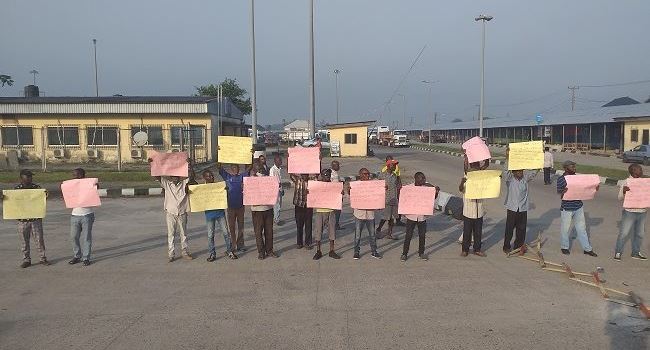 A number of disengaged employees of the Nigerian Ports Authority (NPA) Warri Monday held a protest, urging Minister of Transport Rotimi Amaechi and NPA Managing Director Hadiza Bala-Usman to fulfil the vow made regarding the payment of their severance packages.

The NPA staff, dominated by onboard security operatives and tally clerks who were dismissed in 2015 following a verification exercise, picketed the entrance of the New NPA in Warri.

The maritime employees, under the aegis of Maritime Workers Union of Nigeria, claimed their peers in other ports across Nigeria had been paid severance packages while they had been neglected in spite assurance from government.

Francis Agbudumhe, spokesman of the NPA workers, said the non-payment of their benefits was impacting the welfare of the disengaged staff, with some already dead while a couple of them were down with sickness.

“We have lost a lot of our members, some of them are bedridden; many of us have no homes, our children can no longer go to school, money lenders are chasing us here and there.

“We are heavily indebted. Even the money we are expected to get can’t solve any problem after this delay. But we need that money it’s our right,” he said.

He emphasised the necessity for appropriate authorities to be proactive in pursuing their benefits before the panel responsible for executing the payment was dissolved.

“Before you know it, that committee will be dissolved because the year is ending and once that committee is dissolved, they will not come together until next year, and we don’t want to lose anybody again.

“We will remain here until they listen to us. If they refuse to listen, operations of the port will be shut down.”