Like Grigor Dimitrov, Borna Coric and Viktor Troicki, world number one Novak Djokovic has tested positive for COVID-19 after the Adria Tour competition.

Djokovic, who revealed this in a statement on Tuesday, said his wife also tested positive although their children were negative.

The 33-year-old Serbia became the latest tennis player to be infected by the virus following the Adria Tour – organized to help players get back to match fitness after several weeks without competition.

“The moment we arrived in Belgrade we went to be tested. My result is positive, just as Jelena’s, while the results of our children are negative,” Djokovic wrote.

Meanwhile, Alexander Zverev, Cilic and Andrey Rublev, who also played in the Adria Tour, have tested negative, but have all gone into self-isolation. 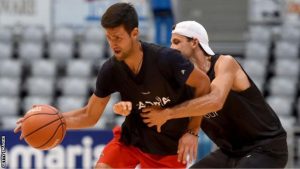 The ATP Tour has been suspended since February due to the coronavirus pandemic. But Djokovic’s Adria Tour, which was not an ATP Tour, attracted 4,000 fans in its first leg in Serbia, while the second leg held in Zadar, Croatia.

“We organized the tournament when the virus has weakened, believing the conditions for hosting the Tour had been met,” Djokovic continued

“Unfortunately, this virus is still present, and it is a new reality we are learning to cope and live with.

“I am extremely sorry for each individual case of infection. I hope it will not complicate anyone’s health situation and everyone will be fine.

“I will remain in self-isolation for the next 14 days, and repeat the test in five days,” he added

It is yet to be known if the organizers of the US Open would still be willing to go ahead with plans to host the Grand Slam this year as the New York Governor already gave the go-ahead.