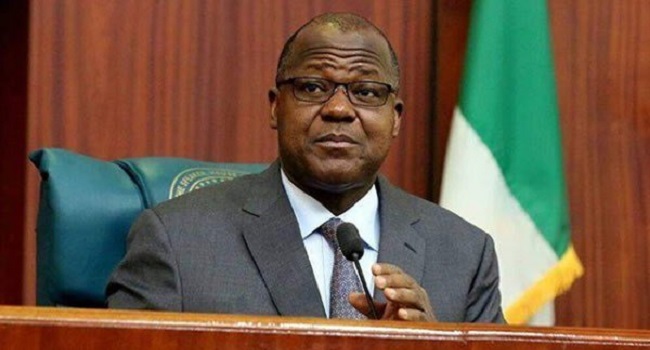 The Speaker of the House of Representatives Hon. Yakubu Dogara has reacted to the suspension of the Chief Justice of Nigeria, Justice Walter Onnoghen by President Muhammadu Buhari saying the President has committed a constitutional blunder.

Dogara said, among other mistakes by the President, the disregard for the rule of law was the peak of all as he (Buhari) has only notified the world that he is now a full blown dictator.

The Speaker in a statement signed by him and made available to newsmen on Saturday, said Buhari has recklessly institutionalised prerogatives which are peculiar to his administration.

He said, “We have watched in disbelief as the Government recklessly deploys institutional prerogatives; routinely flouts the rule of law; subverts and assaults democratic Institutions; refuses to accept opponents as legitimate; suppresses citizens civil liberties(especially those of opponents) and trample underfoot the media. In short, the Government’s tyrannical and authoritarian credentials are loathsomely legendary.

He further explains, “No provision in Sections 157 and 292 of the 1999 Constitution as amended supports the President in purporting to suspend the CJN or swearing in an acting CJN.

“The whole idea of a limited government is that the President’s powers is limited by law and it is ultra vires his powers to act in the absence of explicit legislative authorization. That is representative democracy at its best which our 1999 Constitution as amended guarantees.”

He therefore urged the President to preserve what is left of his integrity by reversing the decision.

“I therefore call on the President to remember that he has no better legacy to bequeath other than a good name: which cannot be achieved without honour, character and integrity. Honour and integrity demand that he upholds his oath of office by reversing this assault on our Constitution and following the manifestly clear and unambiguous constitutional procedure for the removal of the CJN if he must be removed. Anything short of this demeans all of us.”

He called on the international community to wade in into the breach of constitution as perpetrated by the President lest the country plunge into the 1933 Reichstag fire as in Germany.

“That this fire must not convert the Chancellor to Fuhrer as it happened in Germany in 1933 depends on our collective response and that of the international community. We must not bow our knees to dictatorship: not now, not ever again,” he added.