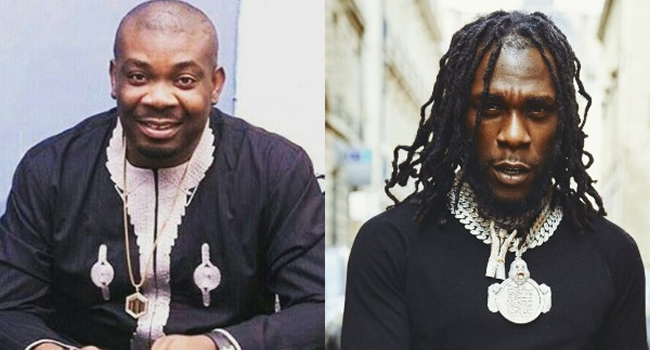 Nigerian music producer, Don Jazzy has been sigthed cooking up something new with Grammy award winner, Burna Boy in the studio.

Don Jazzy, who is the head honcho and founder of the record label, Mavins Record was composing and arranging the beats while the Afrobeats icon, Burna Boy was seen gyrating to the sound.

Don Jazzy who has been on hiatus from music production for almost five years revealed specifically during an interview session with Ebuka Obi-Uchendu on BlackBox that he has been undergoing lessons with seasoned music producers such as Sarz On The Beat and Ozidekuz, who is signed to his label.

The music producer stated that he is prepared to reinvent himself and create massive hits once again.

In the early to late 2000s, Jazzy in his prime was renowned for making hits with his former Mo’Hits labelmates, including D’Banj and Wande Coal. He has remained one of the most significant figures in promoting the Afrobeats culture.

Meanwhile, Grammy winner, Burna Boy is yet to release a solo single in 2021. He, however, featured on Canadian singer, Justin Bieber’s single, ‘Loved by you’ off the album, Justice.

Also, this will be first time Don Jazzy and Burna Boy will be collaborating.

Watch the video of Burna Boy working with Don Jazzy in the studio.

Reports on mismanagement of COVID-19 vaccine in Lagos inaccurate – NPHCDA

Is the Nigerian Economy Ready to Diversify?